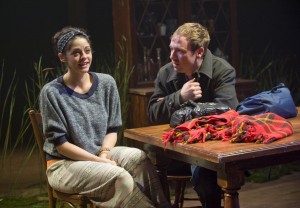 For well over a decade, education, politics and entertainment have been propagating the portrait, or rather the Facebook Profile Picture, of a “new American family.” What was once a dime-a-dozen Norman Rockwell print, is, today, a hodgepodge of unlikely characters who cannot keep a lid on their glowing eccentricities. But were we ever really that Norman Rockwell painting? Or was that exquisite turkey dinner just as far out of reach in 1943 as “Modern Family” is today? Both aim to portray perfection—one through an ideal holiday photo, and another through a cutesy moral cherry on top. But a real family is anything and everything but perfect.

Bathsheba Doran’s “Kin,” a comedic drama about a couple’s blossoming relationship amidst the fascinating and unexpected collisions of their friends and family, opened at Theater Wit on Sunday. Griffin Theatre Company’s Midwest premiere of Doran’s play attempts to capture today’s unlikely family, but the blissful improbability of this clan’s chance meeting is severely undercut by the glaring inevitability of it. In an effort to create an insightful drama on today’s “kin,” Doran has written what is actually an agreeable yet average romantic comedy fit for Cameron Diaz, a Friday night, and a pint of Ben and Jerry’s.

Sean (a stone-faced and discreetly sexy Shane Kenyon), an emigrated Irish personal trainer with a flair for dryness, courts Anna (Stacie Beth Green), a hip New York intellectual with a rap sheet of unfortunate boyfriends. The play, however, is not explicitly about their relationship, but the friendships and family bonds that surround it—Sean’s mother, Linda (Susan Monts-Bologna) in Ireland who’s plagued by the memories of a horrendous trauma, Linda’s kitschy brother, Max (Sandy Elias), Anna’s self-involved best friend, Helena (Ann Sonneville), who never ever stops talking, Anna’s stoic father, Adam (John Fenner Mays), who works for the government and questions his daughter’s life path, Sean’s unstable ex-girlfriend, Rachel (Rani Waterman), who has a history of alcoholism, and other hurt souls. Drama and comedy ensue. Comedy prevails.

Directed by  Jess McLeod, “Kin” traipses about the globe with seeming disregard for cultural inconsistencies. Although the play leapfrogs to lands as diverse as Ireland, New York and the Deep South on Scott Davis’ home appliance-meets-forest set, the lingua franca is always awkward urban self-deprecation. The dialogue, though somewhat silly and delightful, falls into the trap of ceaseless philosophizing. Doran’s characters have lofty and unconventional ideas typically reserved for a person knee deep in a marijuana-fueled haze. But, so far as I am aware, no character in the play is ever high, and their worldly observations are all too alike and more than a little on-the-nose.

The performances, like the play, mostly resound the same sustained note of pseudo-sadness, albeit with an inconsistent vibrato. The series of tightly strung scenes depicting seemingly unrelated individuals who will obviously converge in the end are awash in a sporadic intrigue, but as a functioning whole, lack gradation. Within the banal and difficult framework, a few performances explore their characters honestly and with supple sincerity.

As Anna, Stacie Beth Green emotes a simmered frustration masked in a deep and lightly husky voice, but she remains contently sarcastic for just short of the whole play. Monts-Bologna and Elias mix up an Irish upbringing with cliché storybook folksiness, and as Linda’s son Sean, Kenyon is a touch too unflinching. Sonneville’s Helena, a down-on-her-luck actress and best friend of Anna, is initially worrisome. Wailing over her dead dog in the play’s second scene, the character comes across as pushed and the performance overbearing. But Sonneville’s charisma and engagement compel you to remain with her, and she eventually renders her unstoppable freneticism down to a subdued tenderness. Similarly Rani Waterman’s short scene as Rachel is one of the few performances sizably appropriate for Theater Wit.

Sure, these people lead lives saturated with troubled pasts and scary presents, but they have been realized by Doran with quiet mediocrity. The playwright’s obsession with cleverness has passed down undeniable commonalities of voice onto her characters, and the actors, while capable in craft, look as though they could all be related to each other already. In a play where the drama thrives on human differences, there are very few pointed, significant differences to be found among these people. The mild drama’s overwrought pleasantness makes Doran’s modern “Kin” look not so different from Rockwell’s middlebrow wartime propaganda. (Johnny Oleksinski)