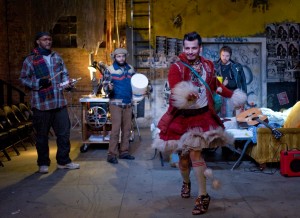 That director David Cromer has developed a reputation for an ability to work magic on even the most taken-for-granted shows made his interest in “Rent” particularly intriguing, to say the least. No ordinary show, part of the mystique of “Rent” was the stranger-than-fiction reality that the composer of this updated transposition of Puccini’s “La bohème” from a nineteenth-century Paris garret with tuberculosis looming overhead to a 1990s flat in Greenwich Village with AIDS as the culprit, died suddenly of a burst aortic aneurysm on the night before “Rent” was to open in 1996. A mere thirty-five years old when he died and so living the bohemian lifestyle described in the show that the set designer made sure that the flat actually looked better than the composer’s own so as not to make him feel self-conscious, the late Jonathan Larson never lived to see or benefit from the extraordinary success of a work that he personified both in his life as a struggling artist and his untimely early death.

The show has been through Chicago a number of times in various incarnations of its original Broadway production even since it closed there in 2008. That production was essentially a sung-through concert with an apartment-unit set that was populated with cast members who looked like models, moved like dancers and could serve up high-voltage power ballads at the drop of a hat. There was a lot of melodrama and a lot of sanitizing of the darkest corners of the world that those who live and die for and by art, and art alone, inhabit.

Cromer, no stranger himself to the struggling-artist template although finally being recognized for his extraordinary talent in recent years, has essentially gone back and completely rethought every aspect of this show, from the smallest musical details of the score to the narrative that drives the show and as a result has given us a “Rent” that is more gritty and down-to-earth but which nonetheless never loses its enthusiastic optimism.

It has taken the resources of two local theater companies, American Theater Company and About Face Theatre to pull off this extraordinary production. The ATC space has been converted to a rather untidy New York flat, far less streamlined and elegant than the Broadway production, with two grubby artist wannabes, would-be filmmaker Mark (Alan Schmuckler) and would-be guitarist/songwriter Roger (Derrick Trumbly). Yes, the other inhabitants do make their way in for the opening “Rent” number but, while not afraid to have two scenes virtually go on concurrently to emphasize a point (the twelve-step meeting remains on stage for a variety of scenes, for instance, joining in choruses of its “Another Day” mantra “There’s only us”), Cromer is always careful to make sure that the show’s most intimate moments are, well, intimate.

Roger only comes to life, such as that is, when he has some time alone in the flat, which is when we get his “One Song Glory” number. But instead of a take-no-prisoners power ballad, it actually begins as an acoustic guitar number that Roger plays himself in much the way that a struggling young guy who could barely tune his guitar might perform it. Yes, the show band which is at the opposite end of the space from the actors and above joins in, but it really is as much a statement of a guy desperate to say something—anything—before he departs the world, in this case under the constant threat of AIDS, as it is the craft of the song itself. 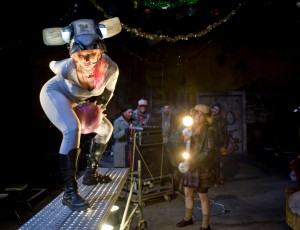 Likewise, when Angel the drag queen (Esteban Andres Cruz) makes her appearance, this is not some beautiful, small guy with delicate features who could easily pass for a woman as was true in any previous incarnation of “Rent” that I have encountered. This Angel has a goatee, a five-o’clock shadow, muscles and huge, hairy legs. Her attempts at looking feminine are delightfully unconvincing, to say the least.

Maureen (Aileen May) so throws herself into her performance art that she actually has a delightfully ill-conceived cow outfit that consists of tights, a Wagnerian horned-headdress that lights up, and a curved shield with points that are udders.

At every turn, there is a surprise, even little touches like using potato chips out of the bag for party food where everyone has a “hit” off of a cheap bottle of wine. Cromer manages to really spotlight the love affair between Roger and Mimi (Grace Gealey) by allowing their duet section within “La Vie Bohème” to stand apart from the party proceedings by rendering it as a ballad. The iconic “Seasons of Love” anthem that opens Act II is done in a circle to piano accompaniment alone with each cast member gently pleading with the audience to take to heart what is being portrayed here, to savor every moment of life.

And the staging of the climax of the show, which originally was so imbued with melodrama that it went “over the moon,” to use Maureen’s phrase, has been scaled back to an intimate moment of love, near-loss and gratitude which really underlines the show’s life-affirming message of making the most of the “now” and a reminder to cherish each other as fully as we can, for as long as we can, as we really cannot count on anything beyond that.  (Dennis Polkow)