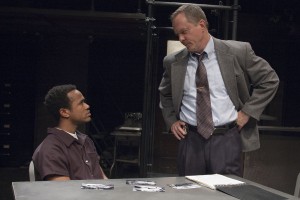 Otha’s (Charles Gardner) murder interrogation kicks off a three-decade search for justice. We only partially see the effects on the families involved; Otha’s parents (Ora Jones and Trinity P. Murdock) fight for their son’s release but fear it as well. Yet accused torturer Dan Breen (David Parkes) and wife Ann (Danica Monroe) seem to sleepwalk through the prosecution.

There’s a great deal of fat in the narrative; dramatizing context and consequence would return the punch to the story. The cost lacks a before-and-after comparison. We never see Otha’s transformation; Gardner can only take the character from brooding to screaming in sixty seconds. Jones’ breathless frustration is the best example of impact the show offers. The historical emergency of the horror is missing. (Lisa Buscani)