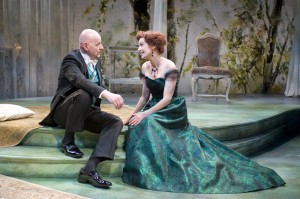 Although Writers’ Theatre is celebrating its twentieth anniversary season, it only began performing musicals a few seasons ago and with mixed results. But with William Brown on board to direct an all-new production of Stephen Sondheim’s “A Little Night Music” perfectly suited to its intimate stage, Writers is giving us a musical production worthy of an important anniversary year.

“A Little Night Music” is the closest Sondheim work to an operetta, with its consistent use of waltz-like rhythms—virtually everything is in triple meter—and some of his most melodic material, including his most popular song, “Send in the Clowns.” It is also Sondheim’s most elaborate use of the kind of counterpoint that Leonard Bernstein had experimented with in the climax of “West Side Story,” for which Sondheim wrote the lyrics. Musically, it ranks among Sondheim’s most ambitious and adventurous works.

That the acting would be of the highest caliber was no surprise, for that is a Writers’ Theatre trademark. But that the musical component should be rendered so exquisitely was a welcome surprise given the unevenness of past musical productions. Musical director Valerie Maze—who also conducts from the piano and celeste—and her extraordinary tiny orchestra (including a tucked-away harp) render Sondheim’s lush score with surprising richness for such small forces. And each performer sings the score superbly even in the complex ensemble numbers, no small feat for how removed the performers often are from the orchestra. 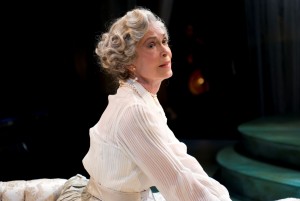 The luxurious casting includes Tony Award-winner Deanna Dunagan as matriarch Madame Armfeldt, who gives tender poignancy to her explanations of the three smiles of a summer-night monologue and has a wonderful chemistry with her granddaughter (Shannon Corey). Often squandered away as a comic role, when Dunagan speaks of the loves of her youth, we are delightfully transported to these earlier eras of her life.

Shannon Cochran as Desirée also goes delightfully against type, who instead of a mere has-been actress is here a mature woman who has allowed her life to move on in another direction while she wasn’t paying attention but who nonetheless makes a courageous attempt to get it back on course. When she sings “Send in the Clowns,” she does it with her eyes wide open about who she is and what she wants, devil may care.

Likewise, Jonathan Weir is struggling with the reality that there is more to life than possessing the youngest girl he can attract (Kristen French) and becomes unexpectedly caught up in competing with his ex-wife’s macho-obsessed lover (Brandon Dahlquist) for her affections while the Count’s own wife (Tiffany Scott) is happy just to have him become jealous on her own behalf. Even the smaller parts of the maid (Brianna Borger) and the morose seminarian (Royen Kent) are played as hormones run amok in repressive environments.

It is rare to have all of the couples in this show be credible as actually being in love especially when virtually all are supposed to be in love with someone else, but this production pulls it off with aplomb and always manages to find the right balance between heartbreak and humor. (Dennis Polkow)