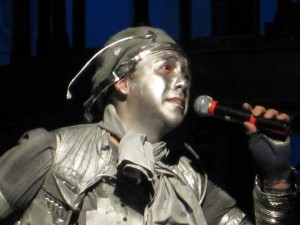 What’s the secret to getting a dystopian future rock opera to harken back to the childhood sentiments of Generation Y? Environmentalism! Au Naturale’s production of Admiral Earth will feel like old hat to lovers of the nineties animated television show “Captain Planet”—it even includes a musical piece that both acknowledges the influence and scorns the comparison. For those who aren’t familiar with the show, Admiral Earth’s lively disposition will undoubtedly clear away the politicking that generally passes for environmental discourse. Political controversy is ignored as the eponymous hero (Dylan Carey) battles Dr. Green Hauseffect (Rob Speer), trying to save his beloved Mother Earth (Andi Woody) from Hauseffect’s clutches. Classic comic-book tropes play out to great delight, but the frivolous plot is compensated for with bombastic exuberance. The two-hour rock opera rarely stops the music, and even in its more somber moments it’s catchy and invigorating. However, what Au Naturale takes from opera in enthusiasm and bravado they just as quickly discard, with regards to opera’s fine-tuned aesthetic considerations and detail. The plot’s carefree attitude toward environmentalism spills over considerably into props and costumes, which consist mostly of plastic trash and homemade cloth cutouts. The production’s blitheness spills over at times into the performances themselves: a missed line here, an awkward dance step there. (Rob Underwood)