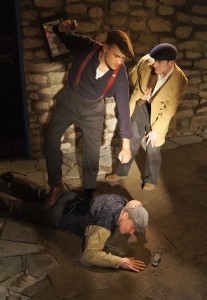 “Ireland isn’t idyllic, and the Aran Islands aren’t meant to be a tourist trap… Inishmaan isn’t supposed to be an escape but a prison–something nasty, brutal and short.” So says the dramaturg’s note on the playbill of Redtwist Theatre’s newest production. The near-claustrophobic theater space, with stark grey stone for the walls and floor and a spartan collection of set pieces, makes for an immediate confrontation with Inishmaan’s nastiness. It is once the play begins, however, that we see the boundaries and limits between brutality and humor toyed with and eventually spit on. Though the words are famed playwright Martin McDonagh’s, Kimberly Senior’s direction and the excellent ensemble skillfully  extract the provincial humor that makes these brutish and rough figures fully human.

The cast as a whole is excellent, but Josh Salt’s performance as the eponymous cripple Billy deserves specific mention. On top of his physical malady, we quickly learn that Billy was orphaned shortly after his birth; the rumors entrenched in Inishmaan allude to suicide and bags full of rocks thrown overboard. There’s a good deal more wrong with Billy, but the final sequences of the play (in addition to establishing this as one of recent history’s great tragicomedies) undoubtedly satisfy best when the audience knows as little as possible. Salt succeeds in making us believe that despite all he’s suffered, he still has hopes for and believes he can attain a better life. Perhaps it is due to Salt’s youth (he’s still only in his third year at Columbia College) that he makes it seem that Inishmaan depends on Billy not just for a hearty laugh, but for a certain spiritual presence that reveals itself over the course of the play. (Rob Underwood)