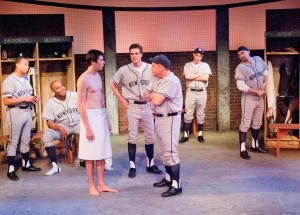 Guys don’t talk, guys solve. The problem is, what does a guy say when the problem can’t be solved? Mark Harris’ 1956 novel/television adaptation examines how paragons of masculinity handle that which has no words.

Baseball pitcher Henry “Author” Wiggen (Michael Stegall) isn’t best friends with catcher Bruce Pearson (Kevin Duvall); he’s not even sure he likes the man. But when Author discovers Bruce is terminally ill, he shepherds him through his final season.

Harris’ herky-jerky vernacular as adapted by Eric Simonson still captivates the ear; it captures the emotional nature of the piece without being mawkish. Stegall captures Author’s cockiness but doesn’t put his vulnerability across the plate. Duvall’s plenty goofy but light on the sweetness that makes the character so attractive. The ensemble nails the roughhousing that comes with being boys of summer but misses out on the heartfelt awkwardness that’s part and parcel of dealing with mortality. (Lisa Buscani)