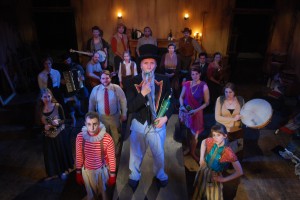 In 1916, The Sparks Circus brought its show to small-town Erwin, Tennessee. The result was that the ghosts of cruelty tarted up with sequins and called the greatest show on earth.

The show’s star attraction, Mary the elephant, murdered its abusive handler; the townspeople’s bloodlust demanded its execution in return. Red Tape creates a sepia-toned flashback with rootsy old-time songs from house band The New Switcheroo and a versatile cast that knows how to sing them.

Ensemble standouts include young Nicole Rudakov, who charms in both monologue and song, Carrie Drapac as the piece’s badly needed voice of compassion and Sean Thomas, the owner who’s dedicated to the bottom line even as his merciless memories haunt him. George Brant’s script can be repetitive, but director James D. Palmer keeps the pace moving. The seating configuration is not exactly access-friendly; seniors and the disabled might need to make alternative arrangements. Tie up those guide ropes, people. (Lisa Buscani)