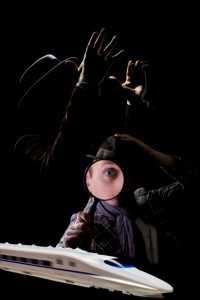 For a show with a running time of less than an hour, Theater Un-Speak-Able’s cheeky new whodunit makes appeals to a surprisingly broad audience. Those eagerly awaiting a high-speed rail zooming through the Midwest will gleefully watch the actors run around the “Toronto Zephyr, ” though specific aspects of the train aren’t integral to the plot, which revolves around the murder of a hated tycoon aboard the train. Taking inspiration from the Agatha Christie classic, “Murder” will also appeal to fans of the classic whodunit genre as it predictably checks off the list of mystery tropes: the slinky femme fatale, the persistent sleuth who knows something is wrong from the beginning and the plucky upstart who just knows he can help. The plot moves more or less as one would expect, with a twist ending that adds a bumbling quality to the whole murder affair.

All this predictability did not, however, take away from the show. The ensemble’s delivery can only be described as zany: every actor plays multiple characters, and as the theater space itself is quite bare, the actors rely on a certain level of over-exuberance to get the desired effect. They ignore the details and get right in your face with the entertainment. (Rob Underwood)