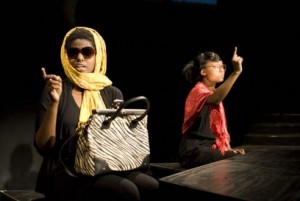 “In The Continuum,” a play by Danai Gurira and Nikkole Salter, gives two black women at opposite ends of the social spectrum and opposite ends of the earth a voice in the conversation about HIV/AIDS. With an optimism about its timely relevance, Pegasus Players has brought the well-received play back to Chicago after a 2007 staging at the Goodman Theatre. Directed at Pegasus by Producing Artistic Director Ilesa Duncan, the hard-hitting production manages to be hard-hitting not by verbally hitting its audience hard on the head with forgettable facts and figures, but by cementing its argument with gloriously realized relationships. Though the play’s ending could be explored further and expanded upon—right now, it’s a bit of a means to an end—“In The Continuum” brings a difficult but important conversation to the theater.

An actor-centric text, “In the Continuum” lives or dies on the shape-shifting capabilities of its two actresses. Samantha Bailey plays Abigail, a television newswoman in Zimbabwe who is the mother to an adoring family, and Ashleigh LaThrop plays Nia, an impoverished and unmotivated girl in South Central Los Angeles with an on-again-off-again boyfriend with whom she sees a bright future. Distinctly and separately, they portray the many different people they come into contact with on their brave journeys. Gurira  and Salter’s monologues are detailed and effortlessly conversational. Though to our eyes and ears these encounters seem single-sided, Nia and Abigail grow as their mothers, friends, doctors and social workers weigh in on the perceived prosperity or bleakness of their lives. The play’s drama and lessons lie in watching and sympathizing with these women as they struggle with their burdensome secret.

Bailey, as the African Abigail, has the arduous task of bending the audience’s perception of the Zimbabwe dialect’s musicality from a happy-go-lucky cartoon novelty to a truthful, living persona. At her most pointed, playing an overworked, underpaid nurse who has outwardly disconnected herself from HIV and its human impact, she humanizes Africa and personifies the entire AIDS epidemic. Occasionally she falls into the dialect trap, but just as speedily climbs out.

As the young Nia, LaThrop gracefully discovers the hidden sensitivity of a woman who already understands perseverance in the face of physical danger. A monologue in which Nia, eighteen, pregnant and HIV positive, tensely weighs whether or not to accept a payout from the family of her absent, basketball-star boyfriend is acted with grounded calm and a strong sense of reality in a scene that textually verges on the melodramatic. LaThrop also has a smart, wise-cracking sense of humor and a fun facility with comedic delivery. Her comedy skills allow the play to never become too emotionally overwhelming.

Duncan’s direction lends additional clarity to a text that, under a weaker director, could rapidly become muddled. On Jackie and Rick Penrod’s set of moveable triangles, each woman inhabits her own side of the stage for the majority of the play–wandering around only as supporting characters. When Nia and Abigail do invade each other’s space, sharply delineated by Mike Durst’s lighting design, the effect is poignant and beautifully telling. Though separated by fine print and extraneous detail, these two vibrant women walk the same treacherous road. And while they never meet, the actresses’ lively and loving support for each other on the stage echoes the support that HIV/AIDS-infected black women must have for one another in this fight. (Johnny Oleksinski)