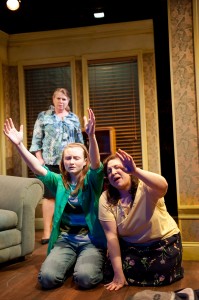 Calling Catherine Trieschmann’s “Crooked” crooked is both a titular cliché and a bolded understatement. Trieschmann’s bizarre little play, enticingly acted in its Midwest premiere by Rivendell Theatre Ensemble, is just as assuredly wonky as it is soap operatic and indecisive. Possibly in an attempt to emulate the warped teenage psyche of its fourteen-year-old main character, Laney (Rae Gray), the play piles confounding perplexity atop confounding perplexity within the confines of an otherwise cookie-cutter structure. Although such overblown confusion does nothing to serve character development—roles appear to develop, but the learning is short-lived—it adds a peculiar individuality and rebelliousness to the unexpected and highly watchable work.

Laney, a troubled teen with a knack for writing vividly gruesome short stories, and her mother, Elise (Tara Mallen), a prideful woman who embraces the liberalism of the family’s Madison, Wisconsin origins, relocate to a strange and foreign land: Oxford, Mississippi. But upon their arrival in William Faulkner’s hometown, Laney, a loner who was born with a twisted back, fears she won’t make a single friend. But she meets Maribel (Hannah Gomez), an overweight girl whose inherited religious fanaticism has given her some interesting ideas about life and some super awkward social skills. The girls’ friendship tackles questions of religion, love and sex, but the overwrought plot movements and the lack of grounded characters undermine their efforts to seek out the answers.
Director Sandy Shinner and her actors have found an abundance of truthful moments in their production, despite the text’s lack thereof, wisely focusing “Crooked” on the intriguing relationships. Amidst the play’s curt conversation on religion, Gomez does not give in to her character’s written flatness, delivering a touching, meek Maribel with a trapped-but-fervent intellect. When Maribel defensively whimpers “I’m not stupid,” there is an unspoken agreement between her and the audience. Mallen and Gray scratch at the essence of that allusive mother-daughter connection and offer colorful insight into its ups and downs, particularly in their subtler moments on the couch. The many fights and reconciliations, however, become wearisome and slow down the play.
Shinner advantageously maneuvers her three performers around Rivendell’s new Edgewater space nimbly and with deft variation. Her staging collaborates cohesively with Diane Fairchild’s softened, though specific lighting design and Regina Garcia’s sparsely decorated and cozily spacious new-house set.
Trieschmann’s three-women play tests the boundaries of the short drama, taking her characters from exaggerated state to exaggerated state in a manner not befitting its limited ninety-minute running-time. Honest realist drama is a byproduct of, among other things, carefully crafted circumstance, and ninety minutes often forces circumstance into over-concentration. Full-length one-acts are significantly better vehicles for comedy due to the farcical saturation of plot, and the often hysterical “Crooked” succeeds much more as a feel-good comedy than a rich drama. The earned and hearty laughs offer only tasty morsels of catharsis, necessary releases from the dominant onslaught of heavy emotionality at play. Frankly, with all the tightly crammed discussion on issues as big as faith, bullying, sexuality, mental illness and whether love is ephemeral or timeless, I needed an intermission. (Johnny Oleksinski)
Rivendell Theatre Ensemble, 5775 North Ridge, (773)334-7728, rivendelltheatre.org. Through June 23.