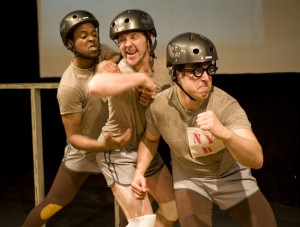 Pine Box Theater’s newest production at the Athenaeum Theatre will leave roller derby fans disappointed, as little derby action actually figures into the play, and theatergoers with a sense of humor will have a tough go of it too. A Rocky-esque rags-to-riches tale of a lowly factory worker who dreams of playing in the derby, “The Jammer” had some potential, with an enthusiastic cast and a makeshift roller derby rink. Unfortunately, cheap and easy laughs were the mainstay of the script—including the tried-and-true laugh tactic of the exaggerated Asian accent.

It’s a shame “The Jammer” isn’t funnier, considering the dramatic aspect never seemed intended for serious scrutiny. There is a love story centered around the lovable Jack Lovington (Josh Odor), but predictable plot holes abound as to his and the other characters’ motivations. There are some bright spots in the production as a whole, most notably Bill Bannon’s turn as Father Kosciusko, who gives Jack advice along the way with excellent comedic timing and presence. Director Vincent Teninty should also be praised for his original stage organization and use of props, but unfortunately it wasn’t enough to save an unfunny, confused play. (Rob Underwood)