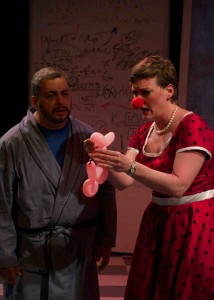 The central conceit of Mortar Theatre Company’s world-premiere production of Merri Biechler’s “Bombs, Babes and Bingo” at Luna Central is, as the painfully sophomoric title implies, a stylized bingo game that determines the order of the scenes. Two fixed scenes frame the play, and the ten vignettes in between rearrange at every performance, creating 3,628,800 potential versions of the same story. An amusing idea, perhaps, but hardly a new one. Even in scripted dramas like “Bombs, Babes and Bingo,” randomizing scenes as a means of storytelling is not uncommon. However, Biechler’s purpose is admirably specific, using the device as a metaphor for the traumatized mind of a scientist, Dennis Davenport (Richard Perez), who is left with scattered memories after an accident.

The bingo game is said to represent the firing and misfiring of Davenport’s synapses as he clamors to remember how he arrived at this hospital. Dennis often rattles off math and science pablum unconvincingly disguised by the script as sophisticated logic, imbued with Perez’s mad-scientist caricature enthusiasm, in order to lend the play a discernible logic. But the effect is rudimentary science fiction.

The semblance of sci-fi that washes over the entire play does, however, contribute enormously well to the design, which is the sole outstanding element of the piece. John Kelly’s lights draw attention to this shiny world’s murk, and Michelle Underwood and Robert S. Kuhn’s set is delightfully haphazard. Underwood’s exquisitely designed video projections bring a whimsical austerity to a work that craves a tonal through line.

The ten scenes do not live up to the intrigue of their godly bingo game (the numbers are called out by a punkishly naïve Megan Tabaque), even given the absurdity of the scenarios. A wife, Ellen (Stephanie Stroud, looking oddly like a stern Julie Andrews), who quits her job and enrolls in clown school, a father who is part of a top-secret government bomb-making collective, and a daughter, Hannah (Erica Cruz Hernandez), a precocious math prodigy who enjoys a game called Algorithmic Hopscotch. The scenes paint a generic portrait of this family and the role Dad’s risky job plays in their deceptively suburban lives.

Director Rachel Edwards Harvith’s staging attempts to steer the story in a compelling direction, but the text’s poor construct proves an insurmountable obstacle. Understanding the combined preposterousness of all of this, I was resolved to laugh at something, and considering the overdone war-at-home theme, I was half expecting to be moved, but instead I sat for the entire seventy-five minutes in a state of benign bemusement. “Bombs, Babes and Bingo,” like its central character, does not quite know what it is yet. (Johnny Oleksinski)