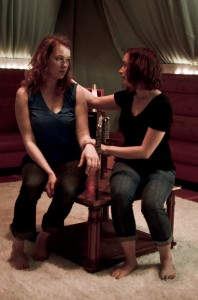 While the theater struggles like never before to maintain its shrinking audience, the not-so-simple question of how to get butts in seats has arisen once again. Is it about time to give up and go back to the drawing board? Not just yet, for a offbeat solution is currently being tested by The Hypocrites in their world-premiere adaptation “Romeo Juliet”: Having tea with the audience.

“Romeo Juliet” is not the first time a theater company has incorporated food and drink into a play, but never has it been served with such cheerful comfort. Arriving to a line of picnic tables in the back of the Chopin Theatre’s basement several minutes prior to the start of “Romeo Juliet,” playgoers are invited to enjoy a cup of piping hot, pungently aromatic mint tea with the actors. There is no catch, no additional charge, no awkwardness, and no forced appreciation of the preface’s cleverness. This lovely gesture sets the scene for a tragedy far less aristocratic and much more rambunctiously teenaged than usual, where the happenstance first meeting of two lovers begins with a “Hey.”

A departure from the standard Shakespearean repertoire “Romeo and Juliet,” Sean Graney’s characteristically demented and astute adaptation inconspicuously combines recognizable segments of Shakespeare’s text, Felice Romani’s libretto of the Bellini opera “I Capuleti e I Montecchi” and a healthy dose of commonplace colloquialism into a unique, vivacious trunkshow. An eighty-minute jaunt of high spirits, the production incisively closes in on the forces that bring the lovers together and the demons conspiring to tear them apart. Like the length, the cast is reduced as well, from twenty to a hard-working four. 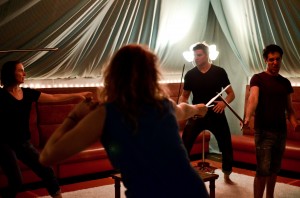 Walter Briggs, Tien Doman, Lindsey Gavel and Zeke Sulkes glisten with infectious pride as they expressively share their love’s labors. Director Sean Graney has affectionately demanded much more of his ensemble than, I am sure, they are accustomed, not to mention more than any careful, rule-abiding Equity theater would allow. These actors each have the additional title of designer, having conceived and physically realized the world they inhabit. That world is a four-sided fabric tent with comfortable red couches and a white shag rug. The effect  of this oversized seventies makeout lair leaves you feeling like a kid playing in a basement fort—and like a Maharaja.

The story of the star-crossed lovers, despite the play’s abbreviated length, mix-matched dialogue and skeleton cast, is told with astonishing breadth and clarity. The tone, alternately playful and horrific, shifts with unforced adjustments in lighting, position and music, often involving a snakey lamp or a nifty retro record player. The music is a cool blend of Leonard Cohen, Fun and frolicking classical fare. Graney’s script acknowledges the play’s theatricality often, with some of the jokes landing better than others, but the device, if nothing else, shatters the audience’s preconceptions.

Briggs finds enchanting sensitivity beneath his imposing height and muscularity as Romeo. His tough-guy exterior lends dynamism to the male ingenue, and forges a deeper struggle betwixt Romeo’s romantic persona and Briggs’ apparent masculinity. Briggs’ relationship with Juliet, a stoically pensive and tenacious Gavel, though, needs an injection of bliss. The passion is alive in spades, but that fleeting bliss, so fantastically stirred up in the audience as they childishly peel and eat oranges, is only burgeoning within the lovers. Doman, playing Juliet’s Nurse and Paris, has the genial eccentricity of so many famous funny-women, and Sulkes as Capulet and others proves, once again, that there is a simmering darkness behind that mischievous smile of his.

The sole other contributing artist is fight choreographer Ryan Bourque, whose riots were so throbbing and catastrophic earlier this year in The Inconvenience’s “Hit The Wall.” Bourque is back at The Hypocrites, where he previously choreographed the marathon “Sophocles: Seven Sicknesses,” and his swordplay here is as menacing and violent as it ought to be. Even for this company, whose productions are nearly always classifiably intimate, this sexy tent is pretty close quarters. And those shimmering blades, handled with safe confidence by all four actors, approximate a trembling, impressively real danger. (Johnny  Oleksinski)