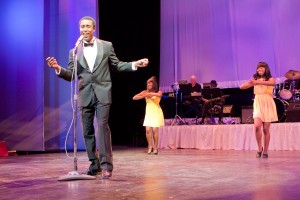 It took me a bit to cotton to Rashawn Thompson as Marvin Gaye. He has a cautious, discomfortable presence not typical of the charismatic characters usually roaming the Black Ensemble Theater stage. (Though he’s eventually a fully loaded sexual healer when “performing.”) But as Gaye’s story unfolds in this world premiere Jackie Taylor production (she’s writer, director and producer of this musical biography), I came to realize that he’s perfectly cast, for Gaye himself was never comfortable in his own skin, fighting a lifetime of demons. Gaye, as portrayed here, was especially haunted by a preacher father who personified evil in his physical and mental abuse of his wife and children, a father who would shoot his famous son dead at the age of forty-five. Though Motown founder Berry Gordy became the paternal figure Gaye needed, the singer never got close to his mogul mentor or comfortable even at the peak of his creative success. Women were arguably even more complicated: after marrying the much older Anna Gordy (the talented Katrina V. Miller, in a subdued performance) in an Oedipal twist, he turns in succession to a tragic partnership with the singer Tammi Terrell and then the much younger Janis Hunter (both played by the vibrant Melanie McCullough) before taking up with prostitutes. As is her style—and not my favorite technique, by any means, but one that seems to find its audience—Taylor finds a happy ending to an unhappy story, wrapping the narrative with Marvin’s prologue and postscript from heaven, giving him the upbeat last word on his downer of a life.

Two of Gaye’s songs are the perfect archetypes of their form: there is no better or more beautiful protestation of war than “What’s Going On”; there is no greater seduction than “Let’s Get It On.” In Taylor’s depiction, both songs emanate from Gaye’s particular pains; without his suffering, his bounty would have never yielded such rich fruit. In fact, though he’s surrounded on stage by one-dimensional characters of either pure virtue or, in the case of his father, pure evil, Gaye might be one of the richest and most complicated character’s Taylor’s “created” yet; we see a man who spurns his domineering father but can neither shake his disapproval nor walk away from the religious foundation that seemed to fire the abuse (nor for that matter can Gaye’s mother, portrayed with extreme virtue and self-sacrifice by Yahdina Udeen, who offsets the simple nature of her character with a moving gospel number, “Oh My God” written by playwright Taylor, that questions her beliefs after Marvin’s death. 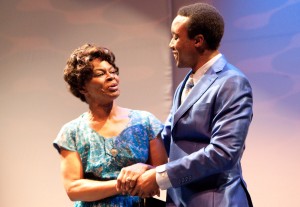 This is the vexing question of the life of Marvin Gaye and of this show, which culminates in a posthumous rendition of one of the most religious of all Marvin Gaye songs, his version of the gospel hymn “His Eye is On the Sparrow”: How much pain can we suffer and still believe in God? It’s the fundamental complexity of spirituality for believers and one that Taylor seems to be grappling with before our very eyes with this show, which she subtitled “Don’t Talk About My Father, Because God Is My Friend” as if she needed to convince herself.

But if the creator is struggling with doubts, her flock seems as devout as ever. I’d never seen a Black Ensemble Theater show other than opening night before, so I was curious to see if the experience remained the same. It does. A BET production is part Vegas show, part gospel church and all-encompassing euphoria. When the audience talks during the show, it’s not the discourteous patter of disengaged patrons that might ruin a night at the Goodman, say, or the Shakes, it’s an audience so fully engaged that they’re talking back to the characters on the stage. In fact, I get so caught up in watching the singing audience members, many in states of seeming blissful rapture, that I have to force myself to keep my eyes on the stage. Mercy mercy me. (Brian Hieggelke)