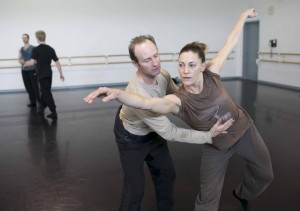 A couple weeks ago I was a fly on the wall of Lou Conte Dance Studio, sitting in on a rehearsal for Hubbard Street’s Summer Series. It was early in the process for a critical visit, but the company was learning a piece new to them—William Forsythe’s 1993 “Quintett”—and original cast member and friend to Forsythe Thomas McManus was in town to set the piece on the company, so I jumped at the chance. Hubbard Street is the first American company given rights to the piece and I’d be witnessing a birth of sorts… not a thing to be missed.

When I arrived, Mr. McManus and rehearsal director Terence Marling were already at work with part of the cast on a duet section. They had just learned the choreography the day before, I was told, and were hammering out trickier sequences in the movement. A backward run into a lift got a lot of attention during my stay, as did a challenging descent. The dancers would occasionally chuckle at their own errors or bafflement.

Typically as audience members at a dance performance (or even as a visitor to rehearsals leading up to a show like this) you and I see a polished product, interpreted and firmly encoded into bodies that command their trajectory and reach with unflappable confidence. It’s the magic of the stage, that denial of the sweat, the frustration, the drilling of rehearsal. But watching dancers of this caliber first discovering the flesh and the soul of choreography is fascinating in an entirely different way. One gets drawn into the process—remarkably far along now, this second day in the studio—of finding not just the execution, but the intention of a movement. Fascinating too is how that intention is interpreted and then played out in different bodies. Seeing casts A and B working side by side I might have been watching two different dances entirely; one dancer wanted to fly, her willowy slight frame almost lifting from her partner’s shoulder during a spin; her statuesque counterpart was powerful and grounded, her presence stealing the show. In these moments it becomes clear how movement is simultaneously cause and effect, the reason and the result of somatic expression.

“Quintett” is one of three pieces on the program. We’ll also see these remarkable dancers perform Ohad Naharin’s “THREE TO MAX” and Alejandro Cerrudo’s “Malditos”—all works by masters. (Sharon Hoyer)