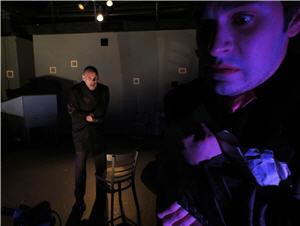 Rarely does one encounter a relatively mainstream production which so skews its focus in the direction of technical artistry and experimentation. In this dark rendition of the common fairy tale of the man who visits children before they sleep, the physical structure of the theater space takes the dramatic forefront. Most of the techniques are legitimately engrossing: disturbing homemade puppets stand in for actors occupied elsewhere (there are only four to account for ten characters); carefully placed cameras project actors’ faces on the back wall, giving the already extremely high level of tension greater depth; frames along the walls stand in for doors and windows used to represent different locales and perspectives. These techniques and others bolster a hallucinatory and fragmented plot, with the specific chronology and setting of many scenes left in question. The Sandman himself exists as the disturbing obsession of the protagonist Nathaniel (played at different times by Christopher Hart and Ben Hertel), who is convinced that the creature killed his father years ago and exists in the guise of a local alchemist. Nathaniel runs the gamut of emotional obsessions, which produce disturbing and captivating reflections on his past and his current desires, whether romantic or murderous.

Bob Fisher’s adaptation of the nineteenth-century short story of the same name, however, does not so much as restructure the plot as scramble it beyond nearly all recognition. The general dynamics of the conflict are clear relatively quickly, but the production as a whole disrupts strict footing as to where, when and who actors are. Violent reflections and diatribes take the place of careful exposition, and general clarity at times suffers from the technical acrobatics Oracle employs. Look elsewhere for tight plot construction and careful pacing or be prepared for at least a second viewing to fully appreciate Fisher’s reimagining of an already multilayered plot. The engaging display of tension-heightening dramatic techniques is what will immediately strike the theater-goer as truly unique and resonant. (Rob Underwood)