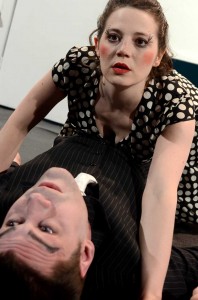 Theater of the absurd isn’t just about delivering farce, which “Anger/Fly” has in spades, but also about representing the meaningless banality of social life through a combination of horror, hopelessness and gallows-humor comedy. Trap Door’s masterful take on what this kind of theater can do and be now begins with a premise from a short Ionesco scenario for a film titled simply “Anger.” In Ionesco’s scenario, a blithe, Pleasantville-esque town breaks out into violence, catastrophe and, soon, the end of the world—triggered by the husbands of the town finding flies in their soup. From this absurdist germ, playwright Ruth Margraff, director Kate Hendrickson and the ensemble have adapted a complex theater piece, with highly-stylized aesthetics, a pastiche of cultural references, and the best Brechtian rendition of “Sugar Sugar” you’re likely to hear in a black box theater. “Anger/Fly” now centers around three married couples, a tramp (who later turns into a fly in a nod to Kafka), a young boy-turned-revolutionary and a television announcer/female Big Brother figure, who presides over the actions of the play through five television sets before being ousted in a coup. If the show sounds dark, it is (though somehow it’s never heavy-handed); but it’s also extremely funny, thanks in large part to the actors’ silent-film-style intensity and deftness at rapidly oscillating between comedy and deadly seriousness. Incisive political themes are lightened by the presence of an apocalyptic paint-splashing war (that somehow seems deeply important to the thematics of the play rather than tacked on), striking expressionistic choreography and sound design and, most of all, by the writing itself. Margraff’s enlivened the diegesis with both very funny one-liners and poetic, solemn monologues that, delivered intensely by actors covered in paint, underscore the bravery of a show that takes risks—and takes this brand of theater seriously. (Monica Westin)