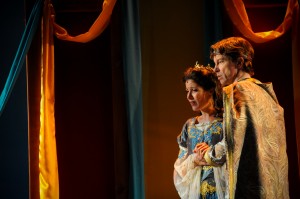 Because “Camelot” had been the favorite show of President John Kennedy, the term was quickly applied to the Kennedy era after his tragic assassination—that “one brief shining moment”—as the real Camelot itself was said to have been a millennia and a half earlier.  The original king, Richard Burton, told me in 1980 when he was reprising the role here that as one who used to drink with JFK when he was a young senator, that even he was yearning—back in the “good ol’ days” and just like the rest of us—for the “good ol’ days.”

That road show allowed Alan Jay Lerner to make revisions that kept all of the comedy but following Lerner’s screenplay for the 1967 film version, the melodrama of the story was maximized by removing some of the more abstract, magical scenes and songs, and by framing the entire story as a nocturnal flashback that Arthur has while waiting to go to battle with Lancelot.

Kudos to Light Opera Works and to director Rudy Hogenmiller for presenting the original 1960 version which includes wonderful scenes that are rarely seen today and for making sure that Guenevere and Lancelot actually keep to their vows and do not actually consummate their love affair from afar, a central plot point in the original play.

This is about as complete a “Camelot” as you are likely to see these days, but even here, two numbers were cut (“Then You May Take Me to the Fair” and “Fie on Goodness!”) and of course, the production includes the luxury of Frederick Loewe’s wonderful score performed in their original Robert Russell Bennett’s orchestrations with a full orchestra (conducted by Roger L. Bingaman), which is effectively used throughout the show even to underscore scenes, although which, at least on opening night, sometimes sounded unbalanced and under-rehearsed in some of the show’s key sections. 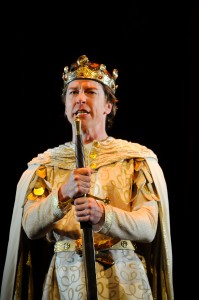 Nick Sandys makes for a dashing King Arthur and seemed more comfortable as the young Arthur than the more seasoned Arthur, a difference that was indicated merely by the presence of whiskers for Act II. His approach emphasizes Arthur’s idealism rather than his weaknesses which deemphasizes the central comedy of the role which taken with his good looks, makes it seem highly improbable that Guenevere would cast her eye at Lancelot (William Travis Taylor), in this production a rather plain and banal figure who like Arthur, misses the comedy of his lines even though he sings up a storm, particularly Act II’s “If Ever I Would Leave You.”

Curiously, Sandys does something refreshing that I have never heard another Arthur do: he actually sings the lines as written rather than speak them in rhythm. Thus, when Arthur does speak a song lyric—such as the benediction at the show’s finale—it has far greater impact. He also brought a sensitivity to his closing Act I “proposition” monologue that was the highlight of the show.

Jennie Sophia brings an exuberance and beautiful soprano voice to the role of Guenevere and Skip Lundby’s Pellinore nearly steals the show. Todd Rhoades’ choreography is particularly inspired during the often cut “Persuasion” ballet scene but little lust is generated in “The Lusty Month of May.” Jeff Hendry’s costumes and Adam L. Veness’ scenery are some of the most imaginative and elaborate seen at Light Opera Works in some time and the chorus was exemplary during the tongue-twisting “The Jousts” scene and poignant during “Guenevere.”

The finale of the piece is considerably less inspired, however, when the supposed boy character Tom of Warwick is nearly as tall as Arthur and his voice as low. Also, the amounts of noxious fog used during Act I and seemingly for every scene made you wonder what the king was seeing tonight. (Dennis Polkow)