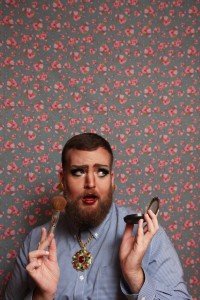 Although billed as an over-the-top cabaret experience, “Don’t Act Like A Girl” (written and performed by Wes Perry) is more sweet than funny and not nearly as campy as the penis coloring pages on the flip side of the program would lead you to expect.  Beginning with his phallus-obsessed early childhood and ending with his late adolescence, Perry recounts several stories of growing up diagnosed and medicated. Many of these stories are punctuated by Perry covering a wide range of tunes, from Patsy Cline to Ozzy Osbourne to numbers from the musical “Hair.” Perry has a decent voice and is supported nicely by an offstage three person band.

Although most of the stories told end in rejection—the drama club teacher at fat camp thinks Perry would make the perfect Beast to somebody else’s Beauty—a few also involve self-discovery, sexual and other.  Perry, a large man with a Paul Bunyanesque beard and a plaid shirt to match, grew up accepted as gay by his family—just so long as he didn’t act like a girl. As he periodically touches up his appearance with rouge and makeup, Perry gradually becomes more assertive and confident. By the end of the night, the audience is addressed by a man in drag who is completely comfortable with who he is—a great way to begin Pride month. (Noel Schecter)