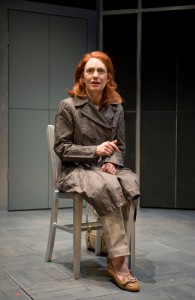 The dialogue of Robert Hewett’s “The Blonde, the Brunette, and the Vengeful Redhead” is not particularly well-written, and the story, agreeably reminiscent of a daytime made-for-television movie, is rife with gaping plot holes. But the key gimmick of the play, a light drama sympathetically digging into the consequences of mindless adherence to gossip and the sublime interconnectivity of mankind, renders the emotionally pure yet overcomplicated story all but unnecessary to the one-woman show’s prosperity. “Blonde,” being a cleverly disguised circus act, requires the play’s leading lady to be a savvy contortionist,  manipulating her person to become a four-year-old boy, a frail elderly woman, a desperate housewife, and a masculine scumbag over two hours.

Deborah Staples carries the one-woman play about a housewife, Rhonda Russell, who, after hearing from a close friend that Rhonda’s husband has left her for a new woman, violently confronts and involuntarily kills the person she believes him to be sleeping with. The plot’s tragedy is that that woman, a caring mother with a loving partner, was not “the blonde” implicated to Rhonda, but an innocent woman her husband did not even know. The story is illuminated by the perspectives of others in Rhonda’s life, looking back on the vicious event from a plethora of diverse angles.

Staples’ performance, as varied as the script requires of her, makes astonishingly creative physical transformations over the eight scenes, playing men and women of dispersed age and background. But the awe inspired by the technical precision of these dramatic transformations wears off a few minutes into each scene. Beyond the immediate acts of shape-shifting, aided by Linda Buchanan’s craftily concealed compartmental closets for each character, the driving force behind each scene is rowdily the growing anticipation for the next costume change. The monologues themselves, beyond expanding the plot, do not cultivate much interest. Though the stories facilitate a visually impressive performance, they progress rather slowly and all have the same watery-eyed emotional tendency. While there is some light humor in the dialogue, it’s greatly hindered by the ever-present sorrow.

Director Joseph Hanreddy, the former longtime Artistic Director of the Milwaukee Repertory, and actress Deborah Staples previously staged this work together at Milwaukee Rep. And the play, which had its North American premiere at the Stratford Festival in Ontario, Canada, has gone on to birth a generous crop of regional productions. The play’s regional popularity is hardly a shock. With so many modern plays exclusively featuring urban characters, it is a welcome change to see suburban concerns and lifestyles explored theatrically rather than on television.

However, the most effective, well-written and transcendently acted scene of the play actually involves very little theatricality and has the most cinematic personality. In fact, it is the only vignette featuring the actress’ real hair, with the other seven showcasing Lara Dalbey’s exquisitely manicured wigs. Staples sits, relaxed but with unrelenting focus, and describes a discombobulating encounter with the most unlikely person. Out of respect for the production, I won’t elaborate on the specific details of the encounter, but Keith Parham’s revealing fluorescent lighting and Staples’ comfort with her true, uncomplicated self together forge a breathtaking truthfulness that’s sadly lacking in the rest of the play. (Johnny Oleksinski)