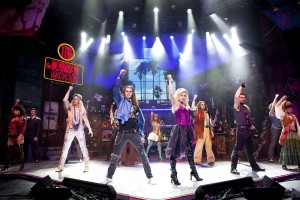 In the interest of full disclosure, I must confide in you that I wasn’t alive for any part of the 1980s. Fully aware that I hardly encompass the target audience of “Rock of Ages,” the jukebox musical in a sit-down production at the intimate Broadway Playhouse, I was resolved to keep a watchful eye on those in the theater who would not, in my guesstimation, be asked for their ID at a bar.

“Rock of Ages” effervescently recalls the concerts of old in the same rollicking and surreally sad manner as “Jersey Boys” and “Mamma Mia.” But, unlike those other jukebox funfests, “Rock”derives its humor and storyline from a goofy lampoon of the longhaired lives of Reagan-era youth–wearing gaudy clothes, drinking wine coolers and aggressively rebelling against nothing in particular.

The Playhouse crowd reacted with booming cheers and raucous enthusiasm to their favorite tunes by Twisted Sister, Poison, Pat Benatar and Journey, but the laughs were half-hearted and the emotional disconnect palpable. The musical pulses so vivaciously when it lets go and allows itself to be a concert that if Chris D’Arienzo’s superfluous and irksomely vulgar book were completely thrown out, I doubt a single tear would be shed.

Like all jukebox musicals, this shoestring story is a fill-in-the-blank madlib lucratively designed to facilitate a cherished songbook. Though these commercial pop pastiches are spreading like weeds across the American musical theater, I have no pressing qualms with them so long as they openly recognize what they are: theatrical cotton candy.

“Rock of Ages” knows itself well. When Lonny (a clownish but often annoying Justin Colombo), the omniscient sound guy-narrator and the deliveryman of more crude humor than I could handle sober, calls “Rock of Ages” “a show of poop jokes and White Snake songs,” he isn’t kidding. But for all its crassness and the occasional bout of idiocy, the musical has a sweet positivity to it that creates a happy oasis from Chicago’s drab spring of moody, pessimist epics.

Sherrie (a ditzy but tender Shannon Mullen), a small-town girl living in a lonely world, and Drew, a city boy born and raised in South Detroit (played with an adorable gullibility by Dominique Scott) take the coming-of-age plunge and move to the wet and wild city of Los Angeles, fresh-faced and with fame on the brain. Neither finds fame, at first, but they stumble instead on the legendary Bourbon Room, a rocker’s paradise owned and operated by the Springsteen-esque Dennis (Jacob L. Smith). In a dispensable downward turn, a German developer (Phillip Peterson) and his repugnantly stereotypical son (Stephen Michael Kane) purchase much of the Sunset Strip with plans to tear down the club and build a shiny new Foot Locker. These lively, ambitious youngsters must save the bar, all while finding true love and discovering themselves amidst a glamorous world of rock.

The songs fit into this fuzzy mold like defective puzzle pieces. “We Built This City” becomes a quizzical number about city planning sung by hippie-holdover Regina (Katie Postotnik), and “We’re Not Gonna Take It,” more realistically, takes on the role of a booming protest anthem. Journey’s classic “Don’t Stop Believin’ ” ends the play as the happy-go-lucky story resolution.

“Rock of Ages,” back in Chicago for the second time courtesy of Phoenix Entertainment, suits a non-Equity engagement better than most musicals of comparative enormity. Adam John Hunter and Marcos Santana have respectively recreated Kristin Hanggi’s original direction and Kelly Devine’s original choreography without compromise or too much noticeable coupon clipping. The actors’ voices strain at times to achieve those sky-high notes effortlessly hit by Freddie Mercury and his contemporaries, but any vocal deficiencies are soon forgotten thanks to the ensemble’s fresh-faced earnestness and delightfully gleeful antics.

Lit by Jason Lyons with an artificial saturation of color more characteristic of an outdoor concert tour than a Broadway musical, and presented on Beowulf Borritt’s stage-indicative set, the show’s book is the uncooperative little brat making a funny face in the family portrait. Everything about this musical screams “concert!” but the innocently nostalgic audience must sift through the countless tentatively funny scenes to get to what they truly came to see, hear and relive: the killer songs of easier days. (Johnny Oleksinski)