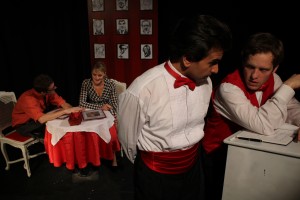 In “Almost An Evening,” playwright Ethan Coen’s apologetically titled collection of loosely connected one-act plays united by their existentialism in a new production at Circle Theatre in Oak Park, the word “almost” is qualitatively generous.

Although theater aficionados may be unfamiliar with Ethan Coen, he’s well-known as one-half of the fraternal filmmaking duo the Coen Brothers. Effusively lauded in 2007 for their Academy Award-winning thriller “No Country for Old Men,” the brothers’ voluminous body of cinematic work is at its most satisfyingly strange when the freakish pair renders a film’s genre unidentifiable.

Ethan and Joel carry a widely revered morbid perversion that seeps, or rather gushes, all over their creations like “Fargo” and “Burn After Reading,” two dark comedies that always provoke viscerally titillating and divisive reactions. Coen’s short collection of one-acts, however, softly treads the safe road, and Circle’s production, adequately performed and shyly underwhelming, plays it even safer. Some of Coen’s signature sadistic style unavoidably remains, but the mild politeness of director J. Christopher Brown’s downsized production makes for an affably forgettable hour and forty-five minutes.

The first of the three plays, “Waiting” sees an unassumingly average man, Nelson (an excitedly neurotic Robert Rafferty), idling in a possibly purgatorial plane of existence until the fateful day when he’ll finally be permitted to board the shuttle bus to heaven. But after anxiously biding his time in the office lobby for more than eight-hundred years, overseen by a precocious receptionist, played with a wry grin by Stephanie Stockstill, who does nothing but incessantly pound away at her typewriter, he’s told he must wait even longer. Eight-thousand years longer. There is a peeking satisfaction in watching this tried-and-true situation unravel, but the set-up is quite familiar, and the intermediate scene changes grow tiresome.

Second in the triumvirate is “Four Benches.” A weird play, “Four Benches” is not weird, however, to the point of watchability. A British spy, One (a generic Chris Carr), after witnessing the murder of a cowboy (Matt Thinnes) in a sauna, goes on an abbreviated walkabout of rediscovery. The one-act has a hindering case of middle-child syndrome, only dabbling in the overblown theology of the bookending plays. Though it’s entirely sensible to place the more subtly pensive work in the center, “Four Benches” creates a major lull.

“Debate,” the most Coenesque of the three, features two humanized embodiments of God defending their not-so-omnipresent world views. One half of God, God Who Judges (Ian Paul Custer), is a harsh and unforgiving screamer, scolding the audience with a verbal onslaught of cursing and iron-clad rules and regulations. Custer’s abusive portrayal of God Who Judges is the only truly hilarious performance of the evening. His new-aged counterpart, God Who Loves (David Besky), whispers sweet nothings of free will and spirituality into our ears, infuriating God Who Judges. They go at it, and the play ends. Or so we think…

The elongated denouement of “Debate” abandons the established constraints of the playlet, and descends into a meta-theatrical pit of  self-indulgent, reflective commentary that, like the afterlife of our friend in the first piece, just won’t end. Two couples leave “Debate”—one man being an actor in the production-within-the-production and another taking his girlfriend out on a romantic date—to discuss its intellectual merit at a frenzied dinner. Intended perhaps to strip away pretension from the open ending of “Debate” and the quasi-quirks of the other two plays, the result is interminable narcissism.

“A good play has characters. Real people,” lectures one girlfriend. “It’s just a silly play,” condescends another. The entire almost-evening is discussed in that manner as though the theater is a clumsily disguised learning annex. The egotism, however, does not lie in what they do discuss, but rather what they don’t. Not a single time do these couples question whether the compilation is at all entertaining to them. Coen is a proven craftsman of comedic wit, but for a relatively new comedy by one of film’s leading screenwriters,  “Almost An Evening” is actually quite commonplace and insipidly boring. Without a doubt, the funniest part of Coen’s play at Circle is the implication that it could ever incite an argument. (Johnny Oleksinski)