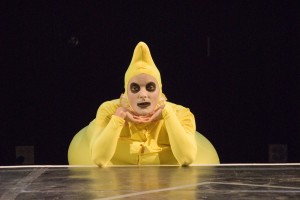 RECOMMENDED
Collaboraction’s brazenly eclectic “Sketchbook” festival has been reincarnated. Back for its twelfth consecutive year, “Sketchbook: Reincarnate” certainly looks different presented in Collaboraction’s two funky new venues in the Flat Iron Arts building, and it feels wholly different, with an altered programming structure that blends much longer pieces with the usual seven-minute fare.

Boldly embracing these gutsy changes, “Sketchbook” has been handsomely rewarded in its new life. An exciting six-course tasting menu of diverse and stimulating world premieres—many of which smartly use Collaboraction’s unparalleled media-design sophistication—”Sketchbook: Reincarnate” is a supremely well-put-together festival whose eight-hour total length breezes by, despite the missteps of a few pieces.

With that in mind, recommending thirteen performances of opposing length, style and subject matter divided into six manageable sections as a singular entity is a task better suited to a person more mathematically minded than myself. However, rarely do festivals like “Sketchbook” include a show that is, simply put, my favorite production of the spring and a top-tier highlight of the Chicago theater season. That show is Dean Evans’ rapturous “Honeybuns.”

Evans’ solo performance is a double-stuffed hour of mystique, guilty pleasure and unexpected uplift entrusted to audiences by a messed-up, nightmarish clown named Honeybuns. Dean Evans’ buffoon comedy is the one true surprise I’ve had all year in the theater, and the production exhausted audiences are craving. From the second Honeybuns—comically billed as “The World’s Greatest Mime,” but more closely related to the fool, the jester and the buffoon—takes the pentagonal stage, piercingly adorned in a full-body neon yellow costume, Evans’ seismically funny, physical and fourth-wall-crushing performance hypnotizes the seasoned theatergoing audience like I have never quite seen.

My practiced critical poker face clocked out after the first five minutes of Honeybuns’ ludicrous miming and world-weary comments, only to be replaced by a childlike, goofy grin. But the evening is not entirely frivolous. Evans exposes our worst—and our most irrational—fears and inhibitions in unusual, poignant and terrifically entertaining ways. As Chicago is an ensemble town, remarkable solo acts only pop up once in a long while. “Honeybuns” is a truly phenomenal one-man work perfect for a blazing Chicago summer, and it simply demands an extended commercial run. 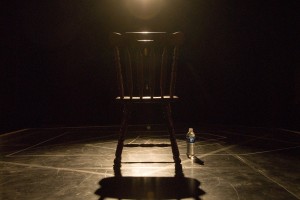 A late addition to the festival is Lawrence Bridges’ “The Interview,” a play of simple but probing questions begged by an inquisitor to a predetermined but unprepared participant. Though aware of their role in the performance, they discover and process the parade of questions in the present moment, sharing deeply personal aspects of their lives with a room full of folks they’ve never met before. The participants change daily, but I saw the recording artist, Himself, as an easygoing and engaging fellow crammed full of words of wisdom. Regardless of who you see interviewed, the experience will always uniquely explore the ongoing theatrical question of whether it is possible to be “private in public.” Are our own lives our greatest performance?

Returning to Sketchbook’s longstanding roots of short plays, “The Seven” showcases seven seven-minute pieces, from abstract and movement-based dances to spoken-word narrative storytelling. I was rather taken with Carlos Murillo’s “Mendacity, or the Herd of Elephants in the Room” which gravely depicts a deceitful man, punished for his lies by having an entire person slowly and painfully grow out of his nose. As directed by Anthony Moseley, the play strikes the same, horrific notes as Pomerance’s “The Elephant Man” and Ionesco’s “Rhinoceros,” but with a domestic, modern sensibility.

I was similarly enticed by “The Abducted,” Greg Moss’ play featuring Gil, a man whose wife, he believes, was abducted by aliens. Gil tells the story of the abduction and presents compelling but inconclusive evidence, as he presumably has many times before. The realistic narrated slide show format is a clever way to bring thrilling science-fiction to the stage.

The most memorable of “The Seven” is a deliciously silly beauty-pageant play, “The Invention of Falling.” A contestant, believing herself to be the reincarnation of Galileo Galilei, endeavors to prove that all objects fall to the earth at the same rate. A highly intelligent riff on an overdone conceit, the contestant’s climactic trance shows deft versatility in both the writer, Kristin Idaszak, and the performer.

Some of the plays, like Ike Holter’s rhythmically bouncing, hip-hop duel “Vigilante” and “Untitled 862,” a movement piece devised by Kevin O’Donnell and Kasey Foster on the relationship between death and earthly human connections, could use more than the allotted seven minutes for their themes and emotional through-lines to fully develop. And Lee August Praley’s “We Have Seven (7) Minutes To Cure Childhood Obesity” is hyper-kitschy and predominantly unfunny. 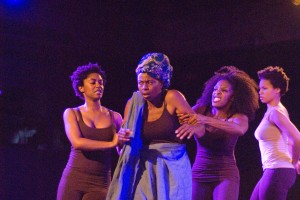 Another full-length program, “[fer] women” is a heartfelt expansion of Nina Simone’s song, “Four Women.” Originally presented  in an abbreviated version at “Sketchbook X”, the play theatrically builds characters out of Simone’s Aunt Sarah, Saphronia, Sweet Thang and Peaches, black women who endured terrible hardship and helped to force great change. The most truthful sections are choreographer Jessica Ellis’ thumping, unison transitions that move us through time. Because of the fifty-minute play’s episodic nature, never does it arrive at the visceral high needed to floor its audience. Director Patrese D. McClain, in an ineffective motif, has her four gifted actresses literally pushed to the ground far too frequently in verbal altercations. The actresses’ performances, though, are uniformly honest and beautifully expressive.

Residing in a No-Man’s-Land between the full-length plays and the seven-minute jaunts, the three devised works of “The Three” all last about half an hour, and are performed in the playground-like Room 300.

“Psychonaut Librarians” by James Asmus and Crystal Skillman and directed by Sean Kelly, begins with the quirky premise that librarians are wisecracking comic-book superheroes with secret identities. Cleverly transitioned with anime size and musical accompaniment, the initial scenes show a slapsticky promise, but the play rapidly becomes uncomfortably decadent, as the wackiness escalates and the script loses much of its humor to a convoluted plot.

“How We Do,” a gestural and audience-involving devised piece by Beatrice Bosco and Lloyd Brodnax King, digs into traumatic memories and how vividly they maintain buried in our psyches. Though I was intrigued by the use of gesture, physicalized repetition and the grounded performances created among the actors through that expression, the play unfortunately loses focus and punch in its later third.

The most innovative and fiery work of “The Three” is Dani Bryant and Erica Barnes’ frightful and fascinating “Last Meal Man.” On stage are actors portraying actual American death-row inmates, now deceased, and delivering monologues as they devour their often-perplexing final meals. Humanity’s relationship to food as a deep, ritualistic association grants a new layer of understanding to these societally loathed and continuously condemned figures. (Johnny Oleksinski)