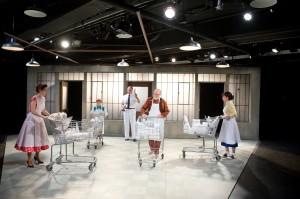 As yet another blistering Chicago summer commences, so too does an outgoing class of talented young theater artists–the future movers and shakers. Reveling in the spirit of commencement, each year Steppenwolf Theatre Company presents the culminating works of Northwestern University’s graduate directing and design students during their month-long “Next Up” festival in the scrappy Garage space. Consisting of three contrasting yet festively complementary works, “Life and Limb,” “South of Settling” and “The Glass Menagerie,” the lineup nicely subscribes to Steppenwolf’s seasonal “war at home” theme, and jointly muses on the nation’s temperamental job market. Graciously thanking the city that has nurtured their artistic growth, all of the plays performed, including one world premiere, actually began their lives right here in Chicago.

Life and Limb
The original production of Keith Reddin’s “Life and Limb” occurred at the now-defunct Wisdom Bridge Theatre, and was staged by Goodman artistic director Robert Falls in his administrative infancy—two years before he took up the reins of the theater on Dearborn Street. Though more than two decades old, Reddin’s play is, today, an effectual reflection of what Steppenwolf’s programming has embraced so strongly in recent seasons: recognizable psychological realism with potent doses of conceptual stylization, like that of Enda Walsh’s “Penelope” and Lisa D’Amour’s “Detroit.”

In Reddin’s play, nearly everyone goes to hell—especially the Catholics. Hell, in “Life and Limb,” is hardly the fire and brimstone of Sunday school, though; it’s a sterile, ivory white expanse and an eternity of menial busywork. Hell sounds an awful lot like Earth… Early on in the play, still among the living, a soldier and a husband, Franklin (Jürgen Hooper), returns from the Korean War missing an arm. His wife Effie (Grace Rex), a wannabe nuclear mom, is initially shocked by the limb’s absence, but quickly comes to terms with the loss. Employers are not so easily accepting. Franklin cannot acquire a decent paying job, and he becomes immersed in the black market, ironically selling limbs for an off-kilter boss named Tod (Chris Froseth). The later scenes all inhabit white-hot hell, where Effie and her Slavic friend Doina (Audrey Francis, providing oodles of hysterical comic relief) reside in impatient waiting. Astute and relevant commentary abound, but the play’s climax resolves the relationship struggles and verges too far away from the deeper messages and creatively imparted commentary at the center.

Director Emily Campbell understands “Life and Limb”‘s comic absurdity  early on, allowing it to creep in for intermittent cameos, but, for the most part, she chooses to delineate it decisively by act. Act one, though occasionally preposterous, is predominately natural, while act two is expressionistically visualized as a blinding, surreal dreamscape (set by Courtney O’Neill and lighting by William C. Kirkham). The ensemble of actors mostly cling to one style or the other. Rex is at her finest at the play’s most unrealistic, and Hooper, deftly possessing war’s harmful after effects, is a conversationalist through and through. Certainly a thought-provoking and enjoyable play, “Life and Limb” deserves a better conclusion. 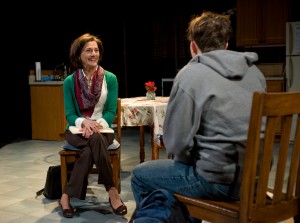 The sole world premiere of the festival, “South of Settling,” without unnecessary judgments, explores the abject complacency of rural domesticity. With the conflict mostly dependent on conceivably small internalized troubles within its characters, the remarkable truths that emerge from this finely crafted new play are a bright reflection on playwright Emily Schwend’s structural finesse and deep-feeling writing style.

Set entirely in a living room and kitchen—with diversions to church, school and a car ride still visually occurring inside the couple’s home—husband and wife, Kate (Janet Ulrich Brooks) and Irwin (Keith Kupferer), find their lives shaken up by the arrival of Kate’s assumedly estranged cousin Amy (Nicole Wiesner) and her boyfriend Randall (Jeff Trainor). As Randall painstakingly struggles to get a job, Amy questions the authenticity of their relationship and the future they have together. Seemingly disparate but actually quite contributory is a subplot in which Paulie (Joey deBettencourt), a high-school boy taught by Kate, won’t speak up about the bullying he’s fallen victim to. “South of Settling” encapsulates all of the homes, schools, and elsewhere in America where communication has broken down.

Of the entire “Next Up” repertoire, “South of Settling” has been gifted the strongest actors. Ulrich Brooks, though occasionally a tad too large for the space, has a suburban franticness so often witnessed at the corner supermarket. As her husband, Kupferer is a lovable dope with a knack for a good one-liner, and deBettencourt’s inherent weirdness is the spitting image of that embarrassed teen we all once were.

Adam Goldstein has directed an ultra-intricate production on the photorealistic set by Sarah JHP Watkins (lights by Becca Jeffords). At times the over-amassment of props and scattered knickknacks prove distracting from the story itself. But, at least once, this distraction is truly rather brilliant. As Kate cooks real eggs, makes real toast and brews real coffee for the genially daft Randall, an awkward pause-filled conversation goes on between the two. But as we’re focusing on the sizzling eggs, we only catch verbal glimpses of the back-and-forth. 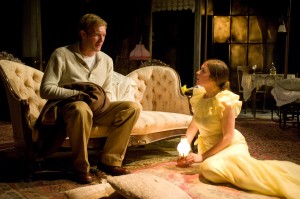 Although “The Glass Menagerie” is still one of Tennessee Williams’ more popular, enduring titles, it forever stands in the shadow of “A Streetcar Named Desire,” which is much grander in just about every aspect. But it’s this play’s delicate emotionality, like the outcast Laura Wingfield’s delicate collection of glass animals, that imparts an incomparable heartsick empathy.

The Steppenwolf Garage is a terrifically appropriate space for “Menagerie” for precisely that reason. An actress has the freedom to sigh and whisper without directorial mumblings of self-indulgence. Infinitesimal displays of discomfort and flirtation can illuminate the dark apartment as the Gentleman Caller chats up Laura. And hints of Williams’ explicitly stated desire for the unreal can forcibly explode onto the stage. The moth-eaten set by William Boles and the honorably dim lighting design by Becca Jeffords advantageously create a whimsically sequestered abode.

Leah Karpel makes a tremendously loving and intelligently shy  Laura, the disabled daughter of the domineering Amanda (Kathy Scambiatterra) and the sister of “selfish dreamer” Tom (Aaron Roman Weiner). But what sets Karpel’s Laura apart from those of her long line of predecessors is that she does not need to put on an introverted disposition: The actress has a natural burning curiosity and a giddy little secret the audience clamors to know. The classic Gentleman Caller scene, in which Laura experiences honest, reciprocated affection for the the first time in her life from a man, Jim (a wisely restrained Brett Schneider), is gloriously realized in director Laley Lippard’s claustrophobic production. And though Scambiatterra and Weiner occasionally confuse Williams’ poetry for complicated southern pastoralism, Karpel and Schneider’s sublime dance broke my heart. (Johnny Oleksinski)