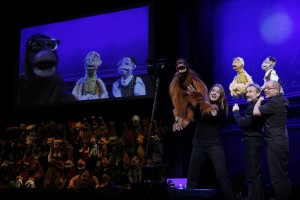 There will always be something uncannily nostalgic and hilarious about the style of puppetry crafted by Jim Henson and perfected in the Muppets, at least for anyone who grew up with a television. In “Stuffed and Unstrung, ” creator Brian Henson has preserved his father’s distinct Muppets style in the puppets and presentation of the show. But this show is R-rated—no unaccompanied children allowed.

The show is a series of sketches performed by the puppeteers and whichever of the many puppets they choose, but it’s the audience that gets to choose the characteristics of the puppets. Energetic host Patrick Bristow selects responses from the audience and, acknowledging there are no kids around, he encourages the audience not to hold back instilling as much raunchiness in the show as possible. Sprinkled in between the more standard puppet sketches are unique bits: audience members come up on stage for even closer interaction with the players, and forty-year-old Jim Henson clips are replayed.

Those with a love of the Henson aesthetic will plunge straight into pure enjoyment as the show begins. But what the younger Henson adds is essential: The puppeteers improvise very well, rarely going for the easy joke that raunchy humor supplies, and the endless diversity of puppets available for their choosing add an extra layer of absurd hilarity. Where else are you going to see a boar argue with a frog in a sperm bank? (Rob Underwood)