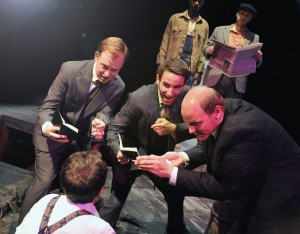 For a musical about a man trapped in a hole, BoHo Theatre Ensemble’s “Floyd Collins” is surprisingly upbeat. Based on the true story of a Kentucky man in the late 1920s who became lodged in a deep cavern of Mammoth Cave, this musical aptly balances gruesome inevitability with hopeful bits of comedy. BoHo Theatre Ensemble is particularly known for ambitious mountings of lesser-known works, and “Floyd Collins” is no exception. The staging is both dramatic and inventive considering the constraints of non-equity theater. Under the direction of Peter Marston Sullivan, this visually pleasing production will satisfy anyone who’s ever wanted to see this infrequently produced musical.

The true story of Floyd Collins is a tragic American epic of literary proportions. A simple man in search of the next big tourist attraction is undone by nature, the undefeatable foe of mankind. Ironically, the entrepreneur’s unfortunate accident became the profitable attraction he hoped to sell to the masses. Floyd Collins shows Americans doing what we do best—cashing in on the misfortunes of others. As the Collins situation grew grim the sensational story attracted reporters from around the country, whose pesky involvement actually hindered rescue crews. In the age of the twenty-four-hour news cycle, the story of Floyd Collins asks us to consider what is news and what is good old-fashioned yellow journalism at its most exploitative.

Written by Adam Guettel and Steppenwolf company member Tina Landau in the early 1990s, it opened off-Broadway in 1996. “Floyd Collins” ran a mere twenty-five performances, and received overall mixed reviews. It wasn’t until the touring production and subsequent revisions that this musical garnered mainstream acclaim—particularly in Chicago, while making its final stop at the Goodman Theatre in 1999.

There’s an inherent sense of drama when a man is fatally wedged in a dark cave, and Landau’s sharp dialogue captures that sense of urgency both above and below ground. The problem with this fairly straightforward tale are the long and mostly forgettable songs, which tend to test the audience’s attention span. The only time the music seems to really connect with the audience is in the group numbers, which unfortunately are few and far between. However, the challenging score is still beautiful at times, pairing a Kentucky bluegrass sound with what can only be described as essentially power-yodeling.

The charismatic cast is lead by Jim DeSelm in the title role of Floyd Collins. DeSelm’s instant likeability and everyman charm is what makes this show’s emotional climax all the more disturbing. DeSelm’s Collins is undeniably real, and even though most of his agony is implied rather than shown, it’s impossible to doubt his dire circumstances. There are touching moments of hope and an unpleasant confrontation with death between DeSelm and reporter Skeets Miller, played by Greg Foster.

Aboveground the Collins’ family struggles a bit with consistency, but Sarah Bockel’s performance as Floyd’s sister Nellie really gets at the truth of small-town dreams and disappointment. Steve O’Connell’s chillingly intense performance as a for-profit rescue worker also provides some of the most dramatic aboveground moments. The full-voiced ensemble is very versatile, with several actors shining in multiple roles.

BoHo’s “Floyd Collins” at Theater Wit is a brisk adventure story that never feels overblown or understated. Whatever problems this show has are not the fault of this talented cast and arresting production. In the end, there’s a lot of life in this story of anguishing death. (John Accrocco)