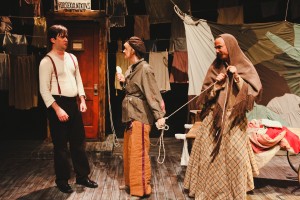 Those Russians sure have such an off-kilter sense of humor, don’t they? I suppose when Siberia makes up three quarters of your homeland’s landmass, that frigid chill can’t help but infiltrate a person’s demeanor every once in a while. Consider the plays of Anton Chekhov. Those deep, dark introspections on humanity’s unquenchable desperation were actually written as country comedies. So, if “The Seagull,” ending in its main character’s tragic suicide, is a Russian comedy, then what is a Russian farce? Well, equally as suicidal, but unrelentingly wacky. Strange Tree Group’s new production of “Goodbye Cruel World,” Robert Ross Parker’s slam-dunk adaptation of Nikolai Erdman’s banned 1928 Communist-era play “The Suicide,”  is a boisterous rebel of a comedy with a deceptively masked, pointed intellect.

Semyon Semyonovich (Scott Cupper), a name with the blandly expedited cadence of John Johnson or Bob Robertson, is jobless in Communist Russia, living with his doting wife Maria (Jenifer Henry Starewich) and his sharp old bag of a mother-in-law, Serafima (Elizabeth Bagby). But in this group-minded culture, job and identity are intrinsically connected, and being unemployed, Semyon is not contributing to the societal whole. On a red-lit set of hanging  T-shirts in neutral tones (set by Delia Baseman, Bob Kruse, Kate Nawrocki and Emily Schwartz; lights by Jordan Kardasz), conformity is nothing if not in vogue. So, in a furiously impulsive act, Semyon rents a tuba, so he can become the world’s foremost tuba player overnight. But without the necessary grand piano, he cannot hear the scales he needs to mimic, and he gives up. All hope is lost, and as Semyon despairingly settles on suicide as his final resort, his life unexpectedly gets an injection of spice.

Staging an effective farce is already such an arduous task, and integrating Strange Tree’s maniacal aesthetic on top of all that is positively Herculean. But Bob Kruse’s meticulous, moment-to-moment direction makes all of the onstage lunacy appear effortless, which is the highest praise I can offer a staging of this genre. The belly laughs come quickly and easily, and although the play, in typical Russian literary fashion, takes a sharp turn toward the nihilist late in the one-act, it remains resoundingly hysterical to the bitter end.

While that smoldering absurdity is omnipresent in the droll text, the farcical insanity has been bolstered by casting a condensed ensemble of six actors to play all twenty-two roles. Unrelated to the literal plot at hand, a wallop of excitement comes from watching the lightning-speed costume changes and unnaturally quick alterations in posture and voice that allow this freakish crew to inhabit so many larger-than-life characters.

Cupper’s Semyon, though impressionably down-on-his-luck, retains a foolish sarcasm throughout that brightens the play. The silliest and most diverse character transformations belong to Bagby, whose unassuming Serafima is the concentrated image of every sharp, biting old lady you’ve ever met. Bagby, as a poet, also delivers a side-splitting acrostic poem about the deceased that rather appropriately spells out “D.E.A.T.H.” All accompanied by a three-person band situated on the side of the stage, wailing out a mournful, but sprightly-sounding Soviet catalogue (music by Michael Huey), “Goodbye Cruel World” is an outrageously absorbing and decidedly Russian farce. (Johnny Oleksinski)