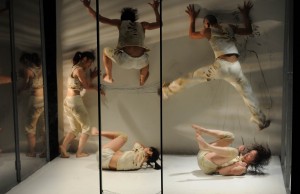 The chances are very good that as you read this, Carrie Hanson and her company The Seldoms are in the midst of an intercontinental creative exchange, at work on a new piece with the Taipei-based company WCdance, who came to Chicago for the first time early this month. Hanson has found a sympathetic artist in WCdance’s founder/director WenChung Lin, a former dancer with Bill T. Jones/Arnie Zane Dance Company. The partnership seems to be a felicitous one; Hanson and The Seldoms have gained a reputation for paying particular attention to place in the creation of dances, be it an unconventional venue like an empty swimming pool or a cargo container, or, most recently, a traditional venue deconstructed. Their last production took place in various spots around the Harris Theater—the stairs, backstage, the bathrooms as much as they were able—in a meta-narrative about the audience experience.

Lin has dealt conceptually with space too, if not in a site-specific vein, at least in a restrictive one. He has created an ongoing series of dances (that I very much hope will be in the repertory shared part of the program) around notions of smallness, and a concept he has coined “Miniature Theater.” The first installment took place in a three-square-meter glass box, the second was set to Western and Eastern love songs in a similarly confined stage. In the third, the dancers get small, moving giant white puzzle pieces around the stage like children who have entered the world of their building blocks.

This collaboration between the companies is first in a two-parter, made possible by a MacArthur Foundation grant; we in Chicago will see the result of a month-long collaboration at the Ruth Page Center at the end of June. Then, in November, Hanson and crew travel to Taipei to work with WCdance under Lin’s direction. We can hope the fruits of those labors make it back across the Pacific as well. (Sharon Hoyer)