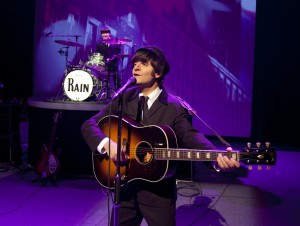 The most important piece of information I must relay unto you, dear reader, is that “Rain: A Tribute To The Beatles,” while residing in one of the Loop’s largest theatrical touring houses, is not, praise Sondheim, a musical. “Rain” is, through and through, a concert.  And yet, absent of a jukebox musical’s flimsy plot structures and lame self-referential humor, “Rain” is an unquestionably theatrical experience.

I was born and bred a Beatles fan. In my early teenage years, I would rock out to nothing else.  From that perspective, if you do not have, at least, a passing tolerance of the Fab Four’s music, then your body will forcibly reject “Rain” like a nose ring that was never meant to be. But ever since their legendary debut in 1960, not another band has formed a pop-cultural consensus quite like that of the Beatles. I grew up in the nineties, and young Beatlemaniacs were commonplace and proud. I’ve never heard anyone say “I hate the Beatles,” and if I ever do, I expect that person will append it with “Bah humbug!”

“Rain,” an offshoot of the long-running “Beatlemania,” begins, like most concerts, with an introductory video montage. But rather than highlighting the peaks and valleys of the group’s illustrious career, the projected clips provide the audience with an atmospheric sense of the sixties through iconographic commercials and news footage. Starting out plainly, the video soon takes a surprisingly dark turn.

President Kennedy is shown riding in his motorcade en route to Dealey Plaza in November, 1963, and, in the blink of an eye, little John F. Kennedy Jr. is saluting his assassinated father’s coffin. That was the volatile world that the Beatles were born into, and the world that desperately needed their exuberant, youthful escapism. That the songs are delineated by informative and entertaining historical archives elevates “Rain” from a glorified coverband to singing storytellers.

The evening lovingly re-enacts actual Beatles concerts while also presenting some songs onstage that the band never got around to performing live. The first concert is their famous appearance on the Ed Sullivan Show. Besides being the Beatles’ American coming-out party, the Ed Sullivan appearance is an apt initial setting because that theater, which today houses “Late Night with David Letterman,” is aesthetically akin to the Oriental and the other houses “Rain” tours nationally.

Singing “I Wanna Hold Your Hand,” these older performers don’t have the same nubile enthusiasm and inherent naivety as the seedling superstars, but their intentions are strong and their charisma pulsating. The four impersonators, Jim Irizarry as John, Mac Ruffing as Paul, Douglas Cox as Ringo, and Tom Teeley as George, acknowledge themselves as a tribute band early on rather than as creepy transubstantiations in an onstage seance. They trace the Beatles’ development with physical and vocal alterations, beginning as slim-suited teenybopper idols and ending as the writers of “I Am The Walrus.” Goo Goo G’joob.

At the concert’s start, the audience is absolutely overjoyed to be hearing their favorite songs of old performed live onstage, but their joy is restricted to the confines of their seats. That is, until, “Twist and Shout,” when the band beckons everyone to their feet, and the entire crowd lets loose. I got such a kick out of watching the twisting and/or shouting of those proud extroverts around me, even though I was overcome by shyness. The only times the show truly comes alive are when the audience is standing and screaming.

But amidst all of the fondly remembered fandom and nostalgia, something is intangibly missing from the two-and-a-half-hour “Rain.” And I am not referring to the popular absent songs like “Yellow Submarine,” “Help” and “Here Comes The Sun.” In the back of my head, I could not restrict the thought that if John Lennon and George Harrison were still alive today, and the band toured a legitimate reunion concert, that they would still fill Shea Stadium to capacity many times over. The real Beatles, tomorrow, could incite a pandemic of hysteria. There is no euphoric hysteria on or offstage at the Oriental, but what is being performed is a most worthy tribute. (Johnny Oleksinski)