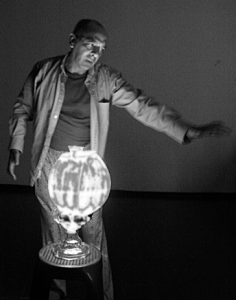 After knocking quietly on a bright red door, I found myself in a room of people running backwards and forward, leading with their outstretched arms and raising themselves onto tiptoe at the end of each length. “Eso es!” shouted the man in sweats in the middle of the room, who did a fair amount of running and swinging in demonstration of the technique. After the motion exercises, everyone sat down for a discussion of “teatro pobre,” or “poor theater,” a concept developed by the Polish experimental director Jerzy Grotowski in the 1960s that aimed to strip away from theater everything but the performance of the actor, placing the personal over the spectacle.

This was day two of Jorge de Haro’s five-day theater workshop at the new MAGI Cultural Art Center in Pilsen. The workshop runs this week in advance of de Haro’s performance this weekend of Samuel Beckett’s “Solo,” known in English as “A Piece of Monologue”—Beckett himself adapted the piece and rewrote it in French, rather than translating it. The Spanish version de Haro will be performing this weekend is a translation from the French. “Solo” is an intense, sparse monologue; an elderly narrator stands alone on a stage lit only by a skull-sized lamp and speaks of birth and death, gesturing at imaginary walls which once held photos, describing a parade of people he repeatedly calls almost loved ones as they go to a funeral. “The language is repetitive, it’s brutally short,” says de Haro, explaining that when Beckett rewrote the piece in French, “he sacrificed a lot of the language.”

“Solo,” says de Haro, is about “an extreme solitude that approaches delirium.” The Spanish title plays on a crucial duality of meaning: “Solo in Spanish means someone who lives in solitude, but in music, “solo” is a movement of a single instrument,” he explains; the monologue navigates “the double concept of solitude and of the movement of the actor as if he were an instrument giving life to a piece.” The scarcity of the staging in this piece imbricates the audience in the speaker’s solitude as he raves about a lost or imagined world, as it stands in for a set: “One part is a wall, one part is the paintings that no longer exist, another part of the audience is part of a funeral, and another part of the audience is the void.” Audience as void has real implications—in de Haro’s evaluation of the world, the more we perfect the means of communication, the more we isolate ourselves. “We don’t even have to be old to feel that kind of abandonment,” or to find ourselves in a world, he says, in which “everyone else exists only in memory, only in the imaginary.” (Alli Carlisle)