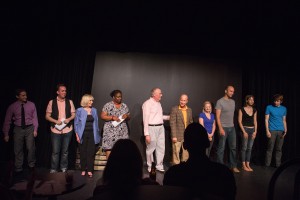 The Citizen’s Play Festival began with more than twenty-five potential plays auditioning for a spot. Ten were chosen to be paired with teams of actors and directors. Weeks passed and tensions rose until six, then four, and soon, only one play remained standing and won the ultimate prize—the spring slot in The Fine Print Theatre Company’s next season.

This is the Citizen’s Play Festival, and it is a live reality show for theater. This quirky new event rounds out the end of the first season at Fine Print, managed by Artistic Director Patrick Kenney and Executive Director Heather Bodie.

“The hardest part is seeing people go,” says Bodie, before stepping on stage after intermission.“I fell in love with all ten groups.”

The pair of Second City-trained actors introduced improvisation to their first production, “At Ease,” the story of a homosexual man in the military. “What Second City taught us was to make bold choices” in technique and material, says Kenney, explaining that what a play can teach eventually loses its power, so new work must constantly be created in order to accurately explore our time in history. “Working with playwrights is about birthing new work” he says. “The playwright gets to see the story become something… you see the performance—it belongs to all of the artists working on it.”

Fine Print’s mission extends to the audience, too. Attendees are encouraged to come to talkbacks for productions and, in this festival, to vote on productions that fulfill ballot categories such as “social/political relevance.” Four plays were exhibited at the festival: “Boy Small” by MT Cozzola, “My 6-Year-Old Therapist” by David Himmel, “Senioritis” by Joe Janes and Pete Ficht and “To Walk Alone, In The Dark” by Erik Gernand. Only the last, Gernand’s play, will be shown next spring. (Eric Shoemaker)