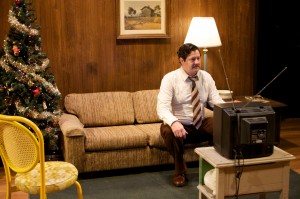 Set in 1975 (three years before the notorious serial killer’s arrest), Calamity West’s script doesn’t uncover anything new about the titular Gacy, nor does it seek to. Rather, this show’s success—and it is, for the most part, successful—relies on audiences already having at least a rough idea of who Gacy is.

Throughout this languidly paced ninety-minute character study, Andy Luther’s tightly wound John Wayne Gacy, Jr. frequently emits a taut, uncomfortable bark of a laugh. Whether reacting to a friend’s confessions of infidelity or insisting that his put-upon wife (Elizabeth B. Murphy) isn’t really leaving him, Luther portrays Gacy as a man constantly fighting to contain his secrets and appear “normal.” But with a concerning stench enveloping his house and a series of young men working beneath the floors before disappearing, he’s having trouble keeping it together.

Scenic designer Sara Brown’s set leaves the crawlspace exposed, letting audiences wonder what horrors lie below, until they’re (partly) revealed in a later scene. And though this scene, and a few with Gacy having late-night talks with a hallucinatory John Wayne (Jim Farrell), goes on a bit too long, Luther’s intensely haunting portrayal will stick with you. (Zach Freeman)