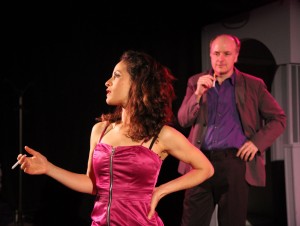 The works of Harold Pinter, even at their most absurd or domestically trivial, always wield a copious amount of underpinning conjecture and layer upon layer of enticing playable depth. The celebrated playwright, who passed away in 2008, was last explored on a large scale in Chicago a year ago in Belarus Free Theatre’s triumphant political protest, “Being Harold Pinter.” The power and timeliness of that company’s love letter to the playwright has been stirring up quite an international storm since then. Pinter has that astonishing capability.

Hal has once again returned to our stages, this time in Soul Theatre’s production of “The Lover” presented at A Red Orchid Theatre. However, in this effort to get their groove back, Soul has turned the potentially thrilling hour-long play into a mediocre, cringingly awkward striptease.

“The Lover” sees a couple start a seemingly innocuous role-playing game in which both pretend to be indulging in mutually agreed upon, extramarital affairs. Husband Richard (Mick Weber) goes so far as to take on the role of his wife Sarah’s (Ravi Batista) lover, Max, donning a persona of fiery passion and lustful enthusiasm that the comparatively vanilla Richard could hardly even approach. The game takes a stark, psychological turn, though, as it rapidly misshapes the couple’s reality into something emotionally violent and physically dangerous.

Director Paul Wagar’s staging is tonally decrepit and absent of even a pinch of the sensuality that the production so intensely and misguidedly focuses on. Wagar has Sarah foolishly dance around the stage for most of the play, while the personal and sexual politics, resigned to the periphery, are completely ignored and prevailing afternoon lounge music squanders any perceivable tension. 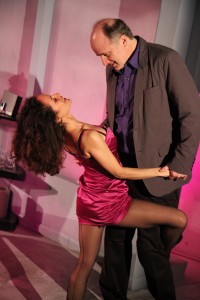 Wagar punctuates the scenes with grossly elongated transitions that do little more than allow the couple to change their many unnecessary wardrobes (designed by Skye Geerts). At first appearing to have some dramatic purpose beyond a lack of creativity, the remaining transitional sequences serve only to nullify the carefully crafted drama and give the audience a moment to shift in their seats.

For a play that relies so heavily on morphing dynamics and ever-shifting relationship roles, the acting is frustratingly consistent. As Sarah, Batista retains an unflinching sultriness of voice that makes it impossibly difficult to take her character the slightest bit seriously. Even if “The Lover” is being playing as comedy, these two people must be somewhat of an amplification of every couple. The lovers, here, are far more off-putting than relatable or even remotely empathetic.

Pinter often is more easily digestible when delivered in its original British dialect as Weber has forlornly discovered in his wordy, snootily staccato speeches as Richard. The barrier of phraseology is glaringly noticeable, and proves not only a distraction, but also an interruption of the play’s natural pace and rhythms.

The tone is further disrupted by Grant Sabin’s scenic design, which is awash in IKEA-esque geometric modernity. The apartment’s sleekness purifies the play’s naughtier attributes and recreates it as a class study more so than a relationship drama. Watching the couple uncomfortably writhe on that stiff, unforgiving model furniture makes the perfect cold shower for this summer heatwave. (Johnny Oleksinski)