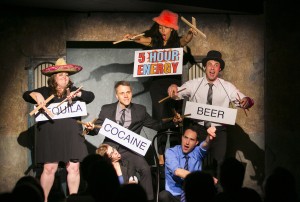 The theme for the Second City’s thirty-sixth revue on the e.t.c. stage is introduced solidly enough, tying into the “live” aspect of theater by pointing out that even though this show might happen over 300 times, the specific instance of the show that you’re seeing on any given night will never happen again and then making audience members touch their hands to prove that they’re in an actual physical, interactive space, and not just watching Hulu at their desk. But while some of these sketches take that concept and run with it, there’s less theme exploration than the title and the opening moments promise. That’s not to say that the bits aren’t funny. Director Ryan Bernier and this topnotch cast make sure that (almost) every single one of these scenes delivers huge laughs. But it’s the largely improvised scenes—particularly a gay man introducing his new boyfriend (an unsuspecting audience member) to his family and a pair of elderly women (Aidy Bryant and scene-stealing newcomer Andel Sudik) enjoying a movie in the park—that really stand out, bringing the immediacy and unexpectedness of a live show to the forefront, and entertaining while also reminding the audience that this show is a one-time thing that is only happening while we’re all in this room together. (Zach Freeman)