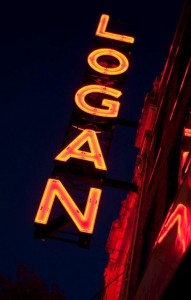 The newly rehabbed Logan Theatre, renovated in March, has unveiled a theater with surround sound, a fully stocked bar and organic fare. Screening a variety of films from independent world premieres to classic noirs to cult hits, the Logan also features an open-mic night on Mondays—the first movie theater to do so in Chicago.

At this event, comedians huddle by the bar in the chrome-accented lobby before the start of the show, sipping on five-dollar PBR tallboys—Monday night’s drink special. At 8:30pm, the crowd moves to the lounge, separated from the lobby by a scarlet velvet curtain. Dimly lit, with dark mahogany chairs and vintage movie posters on the wall, the lounge is a veritable time capsule. A waitress takes drink orders, which come with a complimentary basket of popcorn.

The open mic consists of the usual fare—men in faded T-shirts animatedly telling stories ranging from misadventures in online dating to picking up friends in empty suburban towns to a scathing portrayal of Lakeview inhabitants. Some open mics dwindle as the night wears on, but the Logan’s grows more formidable as time passes. Host and founder of the open mic Lia Berman explains that the camaraderie between each comedian is well-established. “It’s a place to support each other here,” she says. “In other places you see a lot of competition, but here we’re cheering for everyone.” If anything, the gracious audience helps to put the comedians at ease, some of whom have performed at such venues as Zanies Comedy Club in Old Town.
Lia says she and her friends used to perform at the now-shuttered Edge Comedy Club and needed a new space to perform. “I work for M. Fishman & Co., who owns the theater, and I begged for nine months to start this open mic.” After only four weeks, the results have been successful, with every seat filled in the lounge. “This is huge for Logan Square—we need a place to hang out, and a lot of the comedians live in this neighborhood, so this has been really convenient for them.” (Jennifer Yoon)
Signup for the open-mic night begins at 8pm on Mondays in the lobby; the show starts at 8:30pm. Comedians get five minutes of stage time. 2646 North Milwaukee, (773)342-5555.