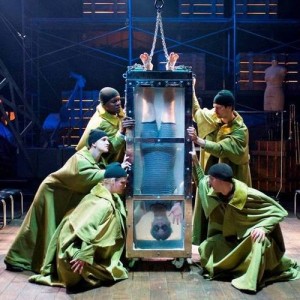 After running from January through April earlier this year at The Chopin Theatre in Chicago, writer/director Nathan Allen’s “Death and Harry Houdini” ran in Miami during the month of May before returning to Chicago for a second extension during July and August. And within a few minutes of watching, its success is easy to understand. Escalating the infamous escape artist to superhero-like status with a rapidly moving origin story, complete with a mystical, elderly mentor and a father willing him to success on his deathbed, the show mixes the creative set design and relatively casual storytelling style of The House with the timing, precision and spectacle of a legitimate magic show. The multi-talented cast carries the comedy and drama of this story equally well, while spouting lines in several languages and wielding both vocal chords and musical instruments with ease. But it’s the show’s star (actor/magician Dennis Watkins) that escalates this from a clever story about Harry Houdini to a uniquely mesmerizing experience. (Zach Freeman)