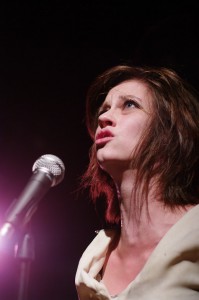 At times we’ve all considered offing our parents, but it’s such messy work. Sonja Moser delivers messy, in many ways, in her new adaptation of Euripides’ “Electra” at Mary-Arrchie Theatre Company (consider wearing your Gallagher poncho, as there is actual mud-slinging going on here). In collaboration with Illinois State University’s School of Theatre, Moser directs an all-undergrad cast in this inventive reinterpretation.

As the saying goes, if it isn’t broken, don’t fix it. Despite the advice, several playwrights have taken a crack at reimagining Euripides’ classic tale of betrayal and murder. Eugene O’Neill famously sought to Americanize the Greek tragedy with his highly melodramatic masterpiece “Mourning Becomes Electra.” Here, Moser takes an entirely new route. Her adaptation is sometimes a stirring musical, and other times a sketch comedy. The rest of the time, she is fairly faithful to the classic tale. Unfortunately the result is somewhat inconsistent, as though the audience isn’t privy to a joke everyone on stage gets. Lengthy digressions from plot and story in unconventional asides often distract from the intensity. As a musical, the songs are guttural and full-bodied. The text is creatively conveyed through song, but it’s not enough to balance out the gimmicky absurdism that mostly comes across as awkward.

As “Electra” wisely demonstrates, women were treated unfairly even in the golden era of democracy. However, the actresses in this cast seem to have the upper hand. Caitlin Boho gives a standout performance as Electra’s mother Clytemnestra, demonstrating clear understanding of themes and text. Emily Nichelson’s confident and wide-eyed Electra comes to life through vulnerable rock ballads and angsty monologues.

Imagery is conjured in interesting ways in this production. After her mother is murdered, Electra and her brother exit the house through slow-moving knife slashes in the cyclorama, a simple but poignant device. Mud is used as both a literal and figurative metaphor and even helps make an astute point in the final scene as the cast members wash themselves of sin.

Those who enjoy the avant-garde stylings of The Hypocrites and unconventional retellings of classics may be willing to overlook the show’s inconsistencies and enjoy the comedy of Moser’s adaptation. The cast often seems just as confused as the audience, but should be commended for their commitment, nonetheless. Such emotional honesty is always intriguing. (John J. Accrocco)