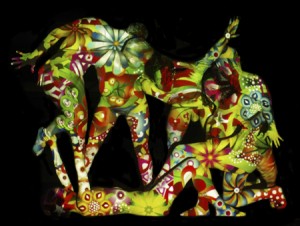 While past shows from The Living Canvas have poignantly captured the beauty of the human body (in every shape and size) by bathing performers in flattering, colorful projections and creating visually striking stories via creative choreography and minimal dialogue, artistic director Pete Guither’s latest creation, “Eureka!,” consists of a series of clumsily disconnected vignettes that stridently (and redundantly) ask viewers to accept their bodies. Full blackouts between each slow the pacing. And despite making innovative use of hand-held projectors to provide more directed spotlight-like projections during various pieces, National Pastime Theater’s cavernous new space (at least twice as big as their old one) swallows this show up, distancing the audience from the performance and leaving the familiarly minimal set—two scaffolds and some black floor mats–looking much too small for the room.

A piece in the middle encouraging audience members to strip off their own clothes and join two cast members on stage for a few minutes proves, by the abundance of volunteers and the speed with which they accepted the challenge, that this show has a definite following. But while the nudity in The Living Canvas has previously felt artistic, this year it felt forced. (Zach Freeman)