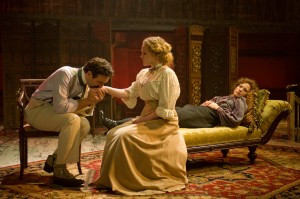 In the wake of two new high-profile adaptations of Anton Chekhov’s classic plays by playwrights Sarah Ruhl and Annie Baker, Steppenwolf Theatre Company has wrought its own homegrown version of “The Three Sisters” by “August: Osage County” scribe Tracy Letts. And, for months, Letts’ turn has been the talk of the town.

Chicago, being familiar with Letts’ coarser indulgences, “Killer Joe” and “Bug,” has been swept up in a whirlwind of understandable curiosity over how the violent playwright would interpret Chekhov’s renowned verbal eloquence. Outside the theater, smooth-talking gamblers could be heard taking bets on the possible number of expletives in Mr. Letts’ Act One. Well, not really. But that’s a close approximation of the community hubbub. Rejoice, Letts fans! Now, the ever-rebellious Masha exclaims “Life sucks, so let’s live it up!” at the dinner table. But Chekhov scholars, rest assured that this predominantly standard production will not shock your delicate samovar-loving sensibilities. I promise.

Director Anna D. Shapiro and Tracy Letts are a proven, formidable duo, having garnered a slew of awards for Mr. Letts’ “August: Osage County.” And there is similar congruency in this new collaboration. Ms. Shapiro’s directorial choices are virtually indiscernible from the playwright’s, be he Anton or Tracy. But the production’s deficiency lies in its streamlined cleanliness.

Shapiro has staged “The Three Sisters,” the story of a family who wants nothing more than to abandon their bleak country estate for the enticing promise of Moscow, with precision and dexterity, creating some breathtaking stage pictures in the process. But Chekhov’s emotionality, a thunderstorm of internal suffering that pretty words alone cannot adequately express, is messy, spontaneous and indirect. This graceful staging does justice to the outer poeticism, but shies away from the inner war. Thankfully the battle wages on for brightest actors onstage.

The most remarkable Chekhovian actors have lived life. Performers with a few years and more than a few unexpected twists of fate under their belts can grapple with their characters’ struggles without over-externalizing their own acting hurdles. Scott Jaeck, whose Dorn was the highlight of the Goodman Theatre’s “The Seagull” last season, has a keen understanding of Chekhov, and his Chebutykin, here, is sobering and introspective.

Chekhov’s plays are loaded with comedy to counterbalance the paralyzing trauma–just as in life. As Jaeck endures the crippling realization of mortality, he laughs between his tears. John Judd as Masha’s lover, Vershinin, and Ora Jones as the oldest sister, Olga, also feel the world’s pain in spades. Alana Arenas, whose Natasha is, to say the least, a spitfire, brings astonishing vitality to the play’s class conflicts. I was rather surprised to find Natasha one of the more thrilling performances of “The Three Sisters.” But many of their onstage compatriots, like Usman Ally as Solyony, Derek Gaspar as Tuzenbach, and Caroline Neff as youngest sister Irina, are a tad watered down and lack emotional gravitas.

A late addition to this cast, like Judd and Jaeck, is Carrie Coon as Masha, the middle sister who cannot reciprocate the love of her devoted-schoolteacher husband, Kulygin (Yasen Peyankov). Coon’s Masha is earthy and brash, and the rambling poem she repeats is as deeply rooted as the chained tree she unknowingly identifies with. She allows Masha’s longing and hopelessness to simmer, until the final scene when the pressure becomes unbearable. Earlier in the play, dancing downstage alone as the house party halts to a close, Coon is dazzling and heavyhearted.

Todd Rosenthal’s well-conceived scenic design is barebones and grayscale, with the center point being a suspended picture frame. Behind that frame is a huge model of the house these characters inhabit, a smartly designed metaphor for the weighty burden that this estate is for these people. The colorless set complements Jess Goldstein’s vibrant costumes, and though the staging does not completely fill the wide expanse the designers have created, it is nonetheless a lovely sight to behold.

Although Letts’ strewn-about colloquialisms are the most glaring addendum to the classic play, the more substantive alteration is the omission of Chekhov’s Russian cultural references. And the change is quite positive. “The Three Sisters” has a running motif of work: characters who love to work, characters that hate to work and characters who measure their value by the work they do.

In a typically translated adaptation, all of the work-talk comes off as an unusually sympathetic prophesy of the oncoming Russian Revolution. Without all the period-specific accoutrements, the conversation onstage very clearly expatiates human hypocrisy and our eternal dissatisfaction with our present situation. Moscow, more so than ever, exists as a holy idea rather than a literal place, and its unattainability, though too lightly realized by Shapiro and her cast, still resonates powerfully. (Johnny Oleksinski)