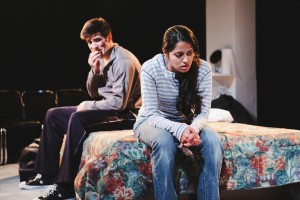 They say to “write what you know.” A wise but awfully frustrating piece of advice from the alluringly ominous “they,” for no one clamors to gain an awareness of their own limitations. But boy can it pay off. Playwright Rajiv Joseph, whose “Bengal Tiger at the Baghdad Zoo” was both Tony nominated and Pulitzer short-listed, wrote his “Gruesome Playground Injuries” in 2009 when he was a spry thirty-five-year-old. A coming-of-age story of unlikely romance and happenstance convergence, the play is an affecting thirty-year journey and an emotionally accurate depiction of contemporary adolescence. And it’s Joseph’s close proximity to the oldest age that his two characters reach, thirty-eight, and his comfortable distance apart from the youngest, eight, that contribute a nostalgia and a striking reality to his tender and supremely intelligent play. “Gruesome Playground Injuries” is receiving its Chicago premiere by Rasaka Theatre Company at the Chopin Theatre in a compellingly intimate and terrifically acted production.

The Chopin, already among my favorite houses in the city, proves its impressive malleability once again, here, becoming a hospital room, absent of extraneous detail (scenic design by Roger Wykes) for some of the most generous, receptive acting I have seen onstage in months. This beloved space has an extensive, rich history of artistic presentation that, like a well-seasoned cast-iron skillet, retains the essence of all that has played its eclectic catacombs. The Chopin’s legacy lends itself immensely to this particular play, whose ambitious timespan and occasionally heavy subject matter are aided enormously by the crypt’s magical, mystical ambiance. The theater itself, like the two actors playing children, teenagers, twentysomethings and thirty-three-year-olds, feels jubilantly lost in time.

The two friends and eternally bound souls are the winsome Doug (Tim Martin) and Kayleen (Mouzam Makkar). Though the burgeoning lovebirds spend an intermissionless ninety minutes onstage together, they never once encounter each other on mutually agreed purpose. More often than not, they are united coincidentally through one of Doug’s offstage daredevil misfires. With the injury acting as the icebreaker, Kayleen and Doug assist each other through many of life’s seemingly insurmountable hurdles. Never preachy and always grounded, each of Joseph’s scenes is a carefully crafted, phosphorescent gem that, when put together with the others, forges an illuminating whole.

While not a favored epic, don’t be tricked. This is hardly an easy play to put on. In the hands of a less capable director and actors, Joseph’s play could quickly descend into the depths of kitsch and become supercilious, like so much theatre that features adult actors playing children. But Rasaka Artistic Director Lavina Jadhwani knows the inherent strengths of her space, most notably the absolute necessity for honest, present conversation. And honest, the conversation is. Martin and Makkar are careful and caring listeners who have a truthful concern for each other’s well being. Makkar’s soft-spoken Kayleen is driven by an unquenchable curiosity of the wider world around her. Martin, a young actor to definitely keep an eye on, doesn’t allow Doug’s personality to become defined by self-destructiveness or symptomatic of masochism. What I saw in his actions was familiar suburban boredom, manifested in thoughtless stupidity—a kid. Martin portrays Doug’s adoration of Kayleen with wide-eyed openness that’s neither forced nor precious. The two performers, during long transitional sequences, switch wardrobes and apply their new blood and guts. And while questionably integral to the piece, the connecting music does occasionally have the tonal syrupiness of an indie romance film.

Doug and Kayleen’s injuries escalate in literal severity as the play treks on. Initially schoolyard cuts and scrapes, these layered characters endure lost eyes, comas and scary self-inflicted wounds. My squeamishness forced me to look away once or twice, but the play’s drive and focus never falls upon the injury itself. Like the most traumatic events in life, be them physical or emotional, these subtly metaphoric injuries open doors for personal growth and reaffirm the characters’ and the audience’s faith in humanity’s optimistic spirit. Gruesome though these battle wounds may be, beauty reigns supreme in this charming production. (Johnny Oleksinski)