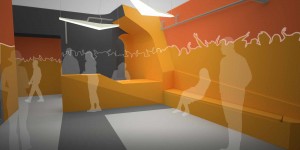 A new center for the arts will soon open its doors on Michigan Avenue, offering classes to the public and rehearsal space for a half-dozen Chicago dance companies and arts organizations. The American Rhythm Center—ARC for short—will take up residence in the Fine Arts Building at 410 South Michigan later this month, bringing rehearsal and operations for the Chicago Human Rhythm Project, Cerqua Rivera Dance Theatre, Giordano Dance and Luna Negra under the same roof, along with the Chicago Youth Symphony Orchestra, Kalapriya Center for Indian Performing Arts and the Chicago Chinese Cultural Institute. The idea is to consolidate space and admin resources for small to mid-sized arts orgs as well as create a downtown nexus for rhythmic arts education. ARC is the brainchild of Chicago Human Rhythm Project executive director Lane Alexander, who has been brainstorming ways that small companies can sustain themselves in an age of dwindling funding sources and ticket sales. His solution: teach the city to dance. Three studios will house classes in a wide variety of styles and traditions. (Sharon Hoyer)