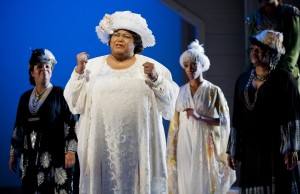 A rhythmic monologue kicks off Regina Taylor’s “Crowns” in a manner atypically somber for a musical. Yolanda (Marketta P. Wilder) stylistically describes, through throbbing dance and spoken word, the violent shooting of her twenty-year-old brother, Teddy. The gospel musical, performed with regularity in regional theaters across the country since its debut a decade ago, has been extensively revised by Taylor for this lively new production at the Goodman Theatre. When “Crowns” was last seen here in 2004, Yolanda was a New Yorker. In 2012, she is a victimized young woman from Chicago’s Englewood neighborhood. That local specificity certainly strikes a chord. After all, it was only a week ago that from July Fourth to July Fifth, twenty-one people were shot in Chicago—some while innocently celebrating and watching local fireworks displays. “Crowns,” an intensely likable show that, I’m sure, has been popularized by its abundance of riveting gospel music, larger-than-life characters, and religious overtones, but has acquired a newfound forceful immediacy. Though still retaining some glaring structural flaws, primarily in its indecisive middle third, “Crowns” is an upbeat testament to the healing power of community.

After Teddy’s tragic death, Yolanda, distraught and proudly adorned in her brother’s bright red cap, flies cross-country to the anti-urbane, Darlington, South Carolina, and moves in with her grandmother. Grandma, the wise and exuberant Mother Shaw (Felicia P. Fields), leads Yolanda on a journey through the alien culture of “hattitude.” What is “hattitude,” you ask? Well, “crowns,” I discovered, is the delightful nickname lovable church ladies give to their decorative headwear. On opening night, the Albert Theatre was a field of blindingly colorful, wide-brimmed hats. Noting that those in the audience with hats on were most open to the experience, the show would surely be enhanced by bringing your own crown along for the ride.

Gutturally shouting, “Why?” Yolanda is guided along by a gospel chorus, adorned in pearly white dresses (Karen Perry) that mimic Maruti Evans’ white-boarded set. The four personable, multi-generational women help Yolanda discover faith in something far greater than menacing gangs and a one-sided relationship with her neighborhood. Through their affable stories about hats (somewhat reminiscent of Nora Ephron’s “Love, Loss, and What I Wore,”), Mother Shaw, Mabel (E. Faye Butler), Jeanette (Alexis J. Rogers), Velma (Jasondra Johnson) and Wanda (Pauletta Washington) show Yolanda that they too have endured suffering and pain, but all found strength in their community, in their faith, and in each other.

Taylor, doing double duty as playwright and director, has staged “Crowns” with bustling enthusiasm and driving forcefulness in the musical’s sung sections, but has left many moments of remarkable written poignancy without enough emphasis. The middle of the production, pulsing with vigor during “I’m On The Battlefield for My Lord,” models a Sunday worship service, but the long section eventually loses tonal differentiation. I was also somewhat mystified by the hesitantly applied images of African culture that appear sporadically throughout the evening. Their purpose, more evocative than meaningful, gains clarity when Yolanda later imparts that “the more I study Africa, the more I see that African Americans do very African things without ever knowing it.” Taylor’s perception is insightful and expands the scope of “Crowns” from being a solely Christian musing, but the motif could benefit from gentle elaboration.

Dianne McIntyre has choreographed “Crowns” with a high-octane combination of hip-hop, traditional African dance and the uplifting sway of Sunday mass. However, while much of McIntyre’s movement is viscerally stimulating, it is occasionally overstuffed with superfluous gesture and unnecessary complication. The choreography is at its best in Wilder’s pounding contortions as she manifests her anguish in loud, therapeutic expression.

Fields, an incomparable force of nature, my companion told me with an awed vocal uplift, reminded her of her own grandmother. The actress’ huggable, heartwarmingly maternal presence comes from her deft ability to be simultaneously stern and warm onstage—a task far more easily accomplished in the kitchen than in the Albert. The love and unshakable frustration felt for someone you deeply care about is breathtakingly alive in Mother Shaw’s relationship with the troubled Yolanda. Along with Fields, Faye Butler allows the gospel music to vibrantly infect her movement and her speech, inhabiting the spirituality of “Crowns” best of all the cast. And Wilder and Johnson, the youngest of all the principals, betray as much eagerness as the older actors do pathos.

Too often do producing theaters misconceive work about a particular community for work that truly speaks to a community. “Crowns,” though, not only speaks to Chicago, but sings songs of praise and promise. In the play’s end, Yolanda comes home to Chicago a reformed, fulfilled woman. I was quite moved to see that she does not give up on her home, but willingly returns. Despite its discrepancies of staging and plot, few works of theater have intent as genuinely virtuous as “Crowns.” (Johnny Oleksinski)