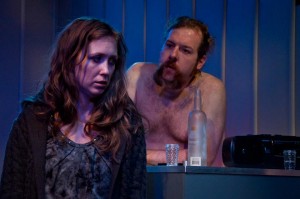 “As I was taking a shit just now, I suddenly realized that this can’t be just a coincidence that I’m sitting here taking a shit and at the same time thinking about it.”—The first line of “Kokkola”

In the “bald and bold” style of the Coen Brothers’ “Fargo,” as director Chad Eric Bergman describes it, Akvavit Theatre stages the United States premiere of the Finnish work “Kokkola,” translated by Nina Sallinen, with aplomb.

The young Akvavit Theatre company, founded just last year, bills their production as similar to the darkly comic film because of its very Nordic “sisu,” which is Finnish for steely perseverance in the face of all adversity. “The film calls it as it sees it,” says Bergman, a Finnish characteristic shared by “Kokkola” a hilarious “arctic tragedy.”

The play indeed has Nordic roots. Bergman, the producing artistic director of Akvavit Theatre, grew up under the influence of the Guthrie and the Theatre de la Jeune Lune in Minneapolis before heading off to Helsinki in 1996 on a Fulbright Scholarship to study cultural transmission through the bilingual theater of the Nordic regions. He then came back and founded Akvavit to create a “conduit” for translated Nordic work in Chicago. “At the turn of the nineteenth century, there were so many Swedish immigrants to Chicago that it was the third-largest ‘Swedish’ city behind Stockholm and Göteborg,” Bergman explains. He wants Akvavit to deepen that tradition by introducing the modern and cutting-edge voices of Nordic playwrights.

Leea Klemola, author of “Kokkola” and shocking theater artist in her own Finnish right, is certainly not afraid of examining the anatomy of shame in a precisely Nordic way. Akvavit forefronts the strangeness of Finnish culture to Americans in their promotional video for “Kokkola,” which pictures four men standing beside a frigid Lake Michigan, nude but for various household wares—a framed painting, an umbrella, some hand fans—covering their genitals. And if you donate, the men will “drop-it-ALL.” Bergman hastily says that his company is “pretty aware” that American sensibilities about nudity are different from Finnish notions. “The naked human form isn’t a big deal, whereas violence is a huge taboo—” thus the interest in Stieg Larsson’s “Girl with the Dragon Tattoo” series. This and other cultural barriers are apparent in “Kokkola” from the beginning of the production, especially in a spectacularly entertaining scene in which the main characters chug bottles of vodka, strip to their skivvies and march around the stage belting in Finnish and smacking one another vigorously on the ass. Theater-goers may become accustomed to gratuitous amounts of nudity, but rarely is such ease and casualness bestowed upon the stark-naked form as in “Kokkola.” Bergman calls nudity “as he sees it,” responding that he must approach it “clinically and with precision—” no frills.

For all its strangeness to the Chicagoan eye, Akvavit’s Nordic sensibilities could bring the theater scene new ideas for staging frank, unabashed reality. Bergman has reciprocal cultural transmission goals: “Eventually I would like Akvavit Theatre to have a unit that brings the work we are doing back to the Nordic countries.” With this feedback loop, Akvavit stands a chance of keeping their Nordic work as Nordic as “Kokkola.” Bergman’s one concern is his directorial translatability: “One challenge that I have had as I direct is avoiding the simple statement, ‘Oh, that wasn’t very Finnish.’” (Eric Shoemaker)