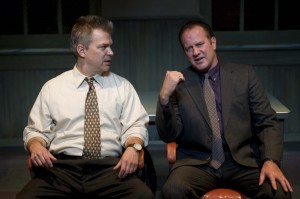 As many productions as  I see, in a theater  community as fertile as Chicago, I still miss many. And sometimes I miss shows that blow up with critical and audience acclaim, to my never-ending dismay. I did not see, for example, “The Elaborate Entrance of Chad Deity” at Victory Gardens, “An Iliad” at Court or even “August: Osage County” when it debuted at Steppenwolf. And many many other shows like these over the years. Fortunately, I’m going to get a second chance with some, thanks to the emergence of the Chicago Commercial Collective (CCC), a new company of local producers who hope to bridge the gap between Chicago’s mostly nonprofit theater world and the high-end, import-centric nature of the city’s top for-profit producer, Broadway In Chicago. Most nonprofits operate on a subscription-oriented season schedule which means even their biggest hits can often be extended just a week. CCC hopes to help these shows reach their fullest audience.

“A Steady Rain,” the unexpected smash hit by Chicago playwright Keith Huff that premiered at Chicago Dramatists in 2007, was one of my regrettable misses. After it closed in Chicago, it was picked up for a Broadway engagement with Hugh Jackman and Daniel Craig taking on the roles of gritty Chicago cops in this two-hander where it set box-office records in a limited run.

With its minimal set—just a table in a room that exudes “police headquarters”—and two-person casting requirements, “A Steady Rain” was a natural first show for the CCC. It doesn’t hurt that the commercial producer shares a principal with Chicago Dramatists, Brian Loevner, who as managing director of the nonprofit is intimately familiar with the production. So he got the “band” back together for another run: both actors who starred in the Chicago production—Randy Steinmeyer as the combustible Italian-American cop Denny who crosses moral and legal lines in his quest, he says, to provide for his family, and Peter DeFaria as his lifelong partner (they met in kindergarten), the single, more ethically grounded Joey—as well as director Russ Tutterow and even the original Chicago Dramatists space, which was available during the summer off-season.

It’s easy to see why folks love this show so much. The script manages to use the minimal device of two characters in a room, speaking to each other and in monologue, to construct a noir narrative that unfurls a plot with the richness and texture of the finest films in the genre, while capturing the speech and behavioral tics of Chicago neighborhood guys who just happen to be cops with far more conviction than any buddy picture ever did. Of course, Huff’s play lives and dies in the casting and it’s hard to imagine anyone in these roles better than DeFaria and Steinmeyer (especially a Brit and an Aussie!). Tutterow wisely keeps everything other than the dialogue at a minimum, allowing the nuances of script and performance to shine. The genre may be well-worn, but “A Steady Rain” is the definitive Chicago cop story, and a portrayal of our city with such authenticity that we should all be thankful to have a second chance to experience it in its original form. I know I am. (Brian Hieggelke)