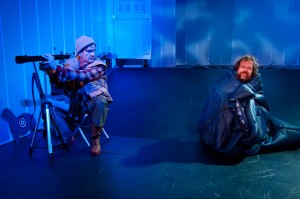 Finnish playwright, director and actress Leea Klemola has been causing quite a stir as a founding member of Helsinki’s Aurinko (Sun) Theatre since the mid-1990s, where many of her incendiary and groundbreaking productions were first produced. Using her celebrity as a popular film actress that had won Finland’s highest acting award, the Jussi, for her starring turn in 1997’s “Neitoperho” to garner attention as a cutting-edge playwright and director, Klemola has written and directed works that manage to be simultaneously provocative and popular. Her 2004 play “Kokkola”—the first in what has thus far been a triptych of “arctic tragedies” partially co-written with her brother and actor Klaus Klemola—is receiving its American premiere by the Chicago-based Akvavit Theatre, a young company which devotes itself to presenting contemporary Nordic plays.

In performing “Kokkola” in an English translation by Nina Sallinen, director and company member Chad Eric Bergman sets out to evoke the deadpan macabre humor and vernacular of “Fargo” with what he describes in a program note as “a Northern Wisconsin/Upper Peninsula” dialect “that sounds as absurd to our Chicago ears as a Kokkola dialect sounds to Helsinki ears.” A fair enough and effective evocation, to be sure, although more effectively and consistently employed by some cast members than others. It is also interesting that some American transliterations are present, including Walmart as a shopping destination of choice in a country where the chain does not exist, and seeming inconsistencies such as references to English as the language employed, sometimes Finnish, all in English, unless it is being suggested that the characters are bilingual, in which case the other common language would be Swedish.

It is also significant to note that the entire play takes place in the middle of the country’s relentlessly long, cold and dark winter, in a western coastal region that is a shipping port and industrial area. Bergman and Sarah Nelson’s set design features sleek vertical white strips that can be translucently lit from behind to suggest bitter cold or lit from the front to suggest interiors, always with a full bar that is regularly made use of by the characters to remind us of the intimate connection between self-imbibing and coping within such an extreme environment. The characters are, to put it mildly, bored out of their minds, with seasonal affective disorder run so amok that even sitting on the toilet becomes a pastime (yes, a toilet is a constant presence) as does naked roughhousing that is disturbingly sadistic and yes, involves several male characters gratuitously, repeatedly and courageously appearing in the nude as if their senses are so numb they do not even notice. Woman are so mistreated and sex is so banal in Kokkola that incest as well as physical and psychological abuse can be mistaken for affection, even love itself, by some so isolated and alienated that they are starving for attention of any kind. Indeed, a constant theme of the play both in endless banter and in constant action is humiliation.

If this all sounds depressing, amazingly, this is really a comedy, albeit a dark comedy, to be sure, both literally and metaphorically. The concept of literal and actual nakedness is also employed as characters expose themselves both physically and psychologically so interchangeably that rawness becomes the default setting.

Klemola is on to something—even if at times the ride is bumpy and destination ambiguous—and the extraordinary and daring thirteen-member ensemble cast brings it off extremely well. Yes, this is a long play (two and three-quarter hours) that, much like O’Neill or Chekhov, is poised to provide an epic and existential experience. And the journey that the characters make, in particular Marja-Terttu (in a breakout performance by Colin Reeves), who is forever morphing in the show in ways that at first seem virtually hallucinatory but given the weather, the drinking, daydreams, the almost hypnotic isolating collective of the surrounding members of a tight-knit community bound by its own rules and coping strategies, seems in some ways the most well-adjusted of the pack. (Dennis Polkow)