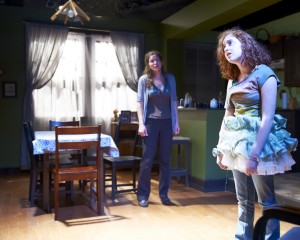 No one surpasses the Irish in avoidance; they can talk huge, polite circles around an issue. Irish playwright Deirdre Kinahan captures a family burying itself in daily minutia to avoid a conflict that has haunted them for years.

Sisters Niamh (Cynthia Marker) and Ciara (Julia Siple) fuss over mother Teresa (Maggie Cain) and fail to discuss the return of brother Nial (Josh Odor) and new girlfriend Ruth (Carey Lee Burton). Nial longs to move on and Teresa is determined to restore her family, but the daughters demand answers about a decades-old crime that rocked their community.

The ensemble successfully translates the tension through not only what is said but what is not said. Marker‘s powerful directness breaks the conflict open; Cain’s resilient single-mindedness buttons it shut again. Burton’s blissful ignorance of the family’s fallout hurts more than it helps. Jonathan Berry’s direction allows the characters to fall over a precipice and survive. (Lisa Buscani)