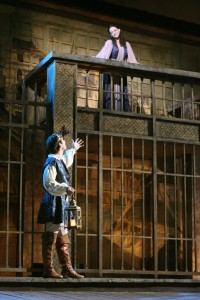 The idyllic pastoral calm of the Mayslake Peabody Estate, the fifteen-year Oak Brook venue of the classically themed First Folio Theatre, lends its natural lightness to the many family picnics that tend to precede the evening’s play. That enveloping environmental gaiety is all part of the theater’s charm and appeal. First Folio, though dependent on the fine citizens of Chicago’s western suburbs, is equally reliant on those city-dwelling Chicagoans desperately wishing to escape the drudgery of concrete and Wrigleyville. But “The Merchant of Venice,” Shakespeare’s most popular problem play which just opened at First Folio, is a two-and-a-half-hour descent into drudgery, no matter how terrific the production might be.

Artistic Director Alison C. Vesely’s  meandering “Merchant” gets lost in the play’s labyrinthine dramatic comedy structure, and settles for only playing nice. The production  cannot shed the sweetness of the company’s suburban outdoor setting, and the result is dominating lukewarm kindness from every character, strangely including the demeaned, however villainous Shylock (Michael Goldberg). Yes, Shylock, the Jewish moneylender who demands, in retribution for unpaid debts, a pound of flesh from the Christian, Antonio (Michael Joseph Mitchell).

Shylock is a much more complicated character than many modern productions let on. For the first 300 years of the play’s life, the moneylender was played as a clownish, anti-Semitic caricature. Money, after all, was, for centuries, a dirty topic to discuss in plays. How many Shakespearean comedies or tragedies have you seen where debt is the chief catalyst? Shylock stereotypically drones on and on about money—at one point verbally devaluing his ingenue daughter, Jessica (Cassidy Stirtz) against his ducats—a borderline inhuman juxtaposition. But the primary reason “Merchant” is cited as being so far ahead of its time is Shylock’s famous monologue beginning, “Hath not a Jew eyes?” 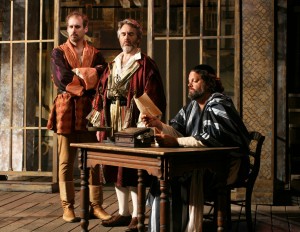 Goldberg pulls out all the stops in his rendition of the iconic speech that, out of context, heralds equality. Because no matter how verse-obsessed an actor or company might be, this monologue will always be riddled with the most pregnant of pauses. Outside of this section, though, Goldberg’s Shylock is casually ambivalent—acting neither the clown nor the villain. The stakes for his character, who is, today, the dramatic core of “The Merchant of Venice” are remarkably low, and the ensuing drama, middling.

Angela Weber Miller’s  scenic design offers an olive branch, keeping the set in dark browns and yellows and creating the spiked gates of the Jewish ghetto as the focal point. Michael McNamara’s lights are alternatively too bright and too dim, but when dealing with the uncertainty of the elements, that is an unavoidable side effect. Also, laced on stage are a number of highly receptive microphones that easily pick up the actors’ voices and send them booming outward. Such amplification in Christopher Kriz’s sound design is terribly distancing. It removes the audience from the actors and the actors from the actors.

First Folio, paying tribute to its name, practices the “Folio Method,” Patrick Tucker’s widely used word-focused system of realizing Shakespearean text with accuracy and clarity. And, to be sure, First Folio’s “Merchant of Venice” has no trouble with the text’s literal meanings. But most of the actors abandon the text beyond the outer shell of definition. They don’t inhabit it, breathe it, or gestate it. That is where the gripping drama or madcap comedy emanates from: complete submission to Shakespeare’s masterful language.

In compensation for the lack of vitality behind the words, the actors, like Kris Reilly’s Gratiano and Luke Daigle’s Lorenzo, unnecessarily seek to lift them up by inserting half-committed jokes and boyish pranks that offer the pretense of personal investment. They are also an inadvertent contributor to the light tonality that frustratingly bathes the play.

As Portia, a fiery young woman and the eventual lover of Bassanio, Melanie Keller is most effective and balanced in her scenes disguised as a male doctor in the Venetian court. Imposing masculinity on her character forces her otherwise strident voice to become grounded and authoritative. While playing typical Portia, though, Keller forces, in her voice and body, a perception of what it is to be classical—a perception that walks a fine line between proper and British.

However, while much of the acting on display is a Renaissance Faire approximation—not to mention Rachel Lambert’s costumes and the punctuating music, more evocative of the Middle Ages than the Elizabethan Era—Kevin McKillip and Cassidy Stirtz, as Bassanio and Jessica respectively, play their characters humanely and simply without overblown peculiarities or self-indulgence. The retrospective societal horrors of “The Merchant of Venice” are most alive in these two naturally innocent performers. (Johnny Oleksinski)