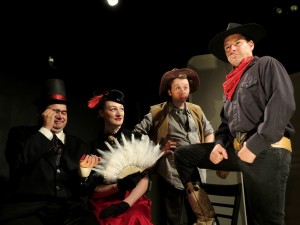 Old-time radio shows found magic in creating a world that allowed listeners to use their imaginations. Oracle’s production of three radio dramas interferes in that process, but their various stagings prove interesting substitutes for the mental landscape.

“X Minus One, ” an examination of a Martian attack directed by Laura K. Smith, makes entertaining use of screens and shadows and its actors lipsynch expertly to the period dialogue. “Suspense,” an old Orson Welles thriller, didn’t fair quite as well; director Brendan Balfe’s use of pantomime wasn’t quite as evocative and the audio sounded tinny. On the lighter side, Lyndsay Kane’s “Hopalong Cassidy” presented a well-written, cleanly staged aural snapshot of the Old West.

The commercials connecting the broadcasts were pure camp. The scripts captured bygone times, drawing laughs when a character filled his gas tank for $1.59. Those days are gone but thanks to this show, they’re not forgotten. (Lisa Buscani)