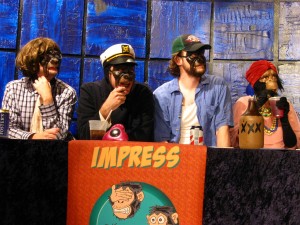 Mark Cuban has a lot of money. You probably knew that. But did you know that he wants to give some of that money ($1,000 to be exact) to the Chicago performer who can out-comedy seven other challengers in an eight-week-long reality-show style tele-competition called “Impress These Apes” judged by a panel of three hyper-intelligent simians from the future? Probably not. Actually Cuban probably doesn’t even know that. But let’s go back a bit.

Last year, Steve Gadlin, executive producer and founder of “Impress These Apes,” went on the ABC reality pitch show “Shark Tank,” and with a ridiculously catchy song-and-dance, convinced the billionaire to invest in a project called “I Want to Draw a Cat For You” in which Gadlin, well, draws a cat for you. A stick-figure cat. And then he mails it to you. The song and dance seemed to seal the deal for Cuban. That’s because it’s a catchy song. In fact, after hearing it, it stays stuck in your head for several days and has so far inspired more than 7,000 people to buy a cat drawing. But, the thing is, when the deal was signed ($25,000 for thirty-three percent of the company), Cuban didn’t just put money into iwanttodrawacatforyou.com, he invested in Blewt! Productions, the parent company of the cat-drawing project, as well as several others, including “Impress These Apes.” So the owner of Landmark Theatres and the Dallas Mavericks now owns one-third of a Chicago comedy project featuring a competition whose winner earns the title Least Pitiful Human (and $1,000 of Cuban’s money).

“He’s not actively involved in this show,” Gadlin clarifies, “but his investment in Blewt! is helping us to offer a higher dollar prize this season.” Gadlin can say “this season” because “Impress These Apes” has run six previous times since its launch in January 2007 at The Playground Theater. After running at iO for its second season (which built on the success of the first, running only a few months later) and the Lakeshore Theater for its third, “Apes” moved to its current location at ComedySportz on Belmont, where it seems to have found a home. “Until we’re a television show,” Gadlin (half) jokes. But supervising producer Erica Reid—who was also a contestant in the first season—validates that the ComedySportz connection is working out: “It works well for us. They treat us well. There’s a good stage. We have the video monitors.” 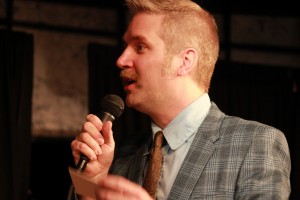 And the ComedySportz space, with its comedy club-style audience seating and raised stage flanked by television monitors, does seem to perfectly suit the show’s format, whose mix of game show, reality-TV competition and sketch comedy is more straightforward than it might sound at first. Season five contestant Neil Arsenty describes “Impress These Apes” on his website as “an original comedy competition that pits eight contestants against each other to create the best performance based on a surprise new challenge presented every week.” Gadlin simply calls it “Reality TV put ten feet away from us that we can participate in.”

But the weekly live show at ComedySportz is only part of the draw. Technology also has a big role to play, as the producers post the videos from every performance online and even live-stream the show as it happens. Reid remembers what that experience was like during the first season. “When I was a contestant, I was in line at Hot Doug’s and someone in line behind me was like, ‘Hey! You’re a contestant! I watch your videos!’ I was like, ‘People are watching!’” There are also contestant blogs, a leaderboard (to show the contestants’ cumulative scores and how they rank against one another each week) and, of course, plenty of tweets. 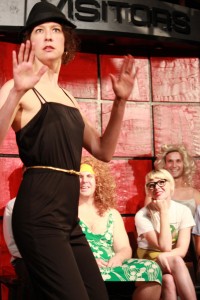 As with any show that features a panel of judges, the contestants are only part of the entertainment. For “Impress These Apes,” the judges are a group of “hyper-intelligent apes from the future.” Which actually means three of the show’s producers wearing ape masks and playing hilarious characters that rate/berate the performers. But while the critiques may sometimes be biting, they’re part of what drives the quality of the performances. “Sometimes the contestants can get upset with the words that the judges say,” says Reid (who also plays the ape-judge April May), “but all the judges and all the producers want the contestants to succeed.”

And they’ve got plenty of talented participants to choose from. This year, producers saw forty-seven auditioners, seventeen of whom were chosen to perform at the opening callback show at ComedySportz on July 9, which was judged by a panel consisting of the winners of the past six seasons. At the July 16 show, during a special “tournament of champions” which featured the winners of the first five seasons competing for $150 with ten-minute pieces including an original song or dance, the eight final contestants (Joana Buese, Clay Goodpasture, Meredith Kachel, Joe Kwaczala, Monique Madrid, Martin Morrow, Wolfgang Stein and Liz Thompson) were announced. They’ll begin season seven of “Impress These Apes” in earnest on July 23, when each of them will strive to impress the apes, writing and performing an original song about their best friend, and accompanying themselves on a musical instrument.

Eight weeks (and eight challenges) later, one of these contestants will not only be the Least Pitiful Human, they’ll also get their paws on some of Mark Cuban’s money.